To many people, as soon as they imagine Oxford, their mind jumps to the world-famous university, and all of the various colleges; Oxford is a city of so much more than its university, but the buildings and heritage attached to them is nonetheless stunning, and an enormous pull-factor to many tourists visiting the area.

When meandering through the narrow, cobbled streets of Oxford which are lined with quaint and colourful shops and pubs, it truly feels as though you have entered an entirely different world, and it has inspired many authors and their fantasy literary worlds throughout history, such as Lewis Carroll, JRR Tolkien and CS Lewis.

Yet, outside of the charming centre lies a span of countryside that is dotted with equally fascinating castles, that offers another side of history that cannot be seen in the city. This list will highlight the best castles that are near to Oxford, their key points of interest, as well as practical information, such as location, and opening and closing times.

The best 12 castles to visit near Oxford 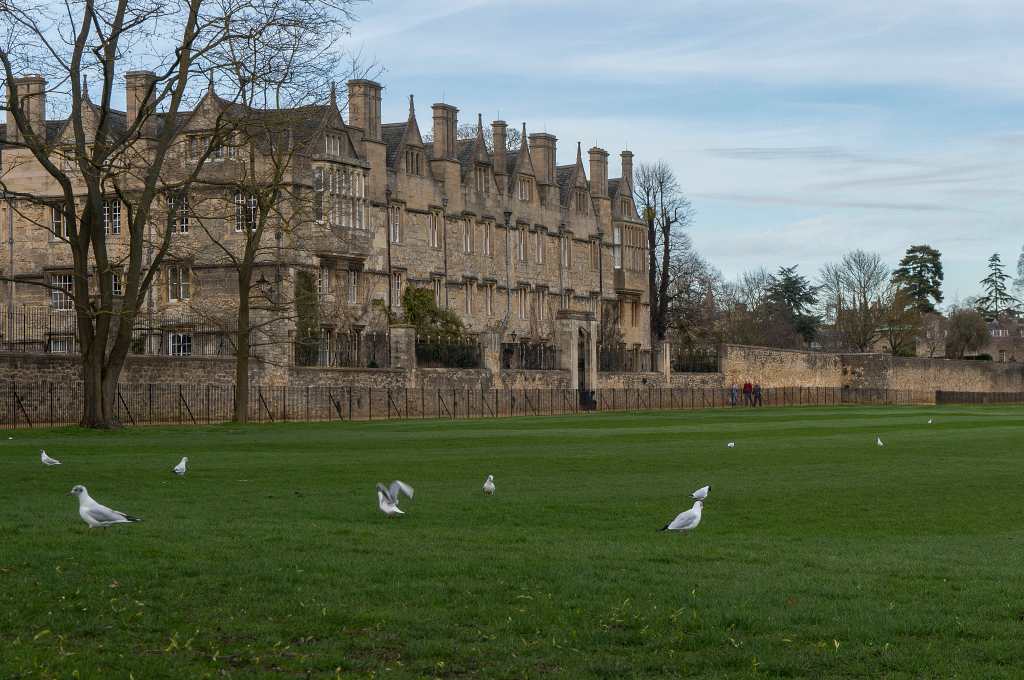 Situated in central Oxford lies the partially ruined Oxford Castle, which is a large and impressive Norman medieval castle. Before the stone castle was built in the 12th century, an original motte and bailey castle stood in its place, and it played a critical role during the Anarchy of the 13th century.

Prior to the 14th century, the castle was primarily involved in military conflict and battle, but at this point, its role was limited, and it converted its function to that of county administration, as well as a prison. Unfortunately, a large portion of the castle was destroyed during the midst of the English Civil War, and what was left became Oxford’s prison again, after having been converted into a watchtower.

This prison existed until the year 1996 when the castle was renovated primarily into a visitor attraction and a hotel; today, the castle can be visited, and it is a Grade I listed building. 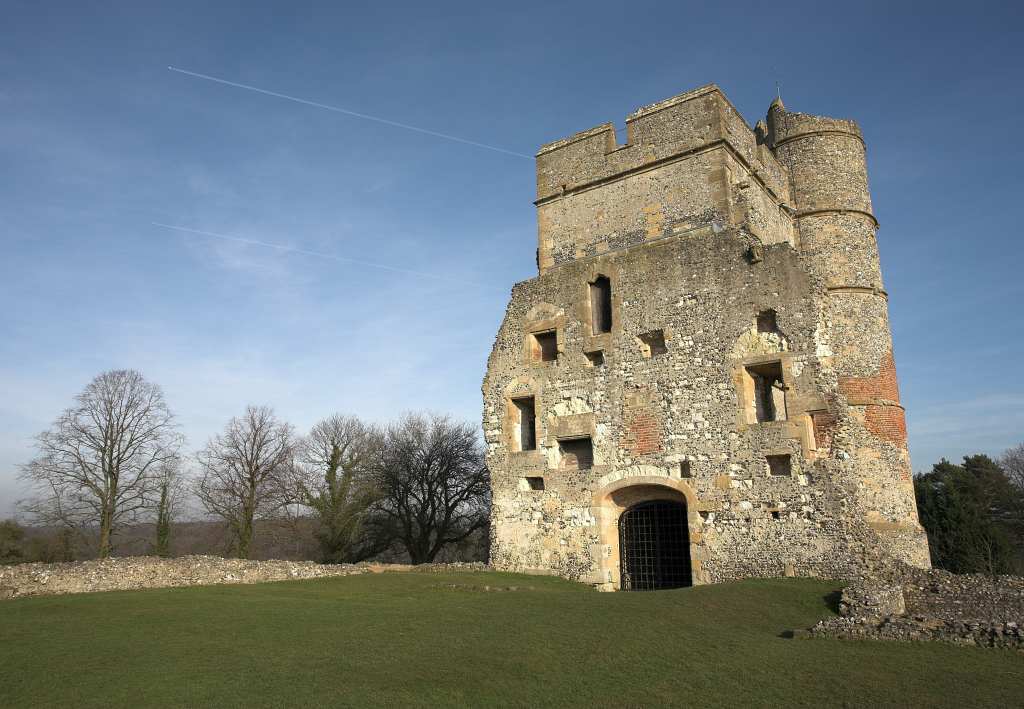 Situated in the scenic English village of Donnington, which is near to the larger town of Newbury in the Berkshire County, lies the ruined medieval Donnington Castle. It was originally founded in the year 1386 by Sir Richard Abberbury the Elder, before later being sold to the son of the famous poet Geoffrey Chaucer, Thomas Chaucer in the year 1398.

Fascinatingly, the family came into conflict with the Tudor monarchy of the time, and Donnington Castle eventually became a royal property; King Henry VIII and Queen Elizabeth I visited the castle during the 16th century. All that remains today is the gatehouse of the castle, as Parliament had voted in 1646 to demolish the castle; today, the castle is in the hands of English Heritage and is a great place to visit for a walk across the countryside and to absorb some history.

Open for visit: It is not possible to go inside the castle, but the surrounding area is always open. 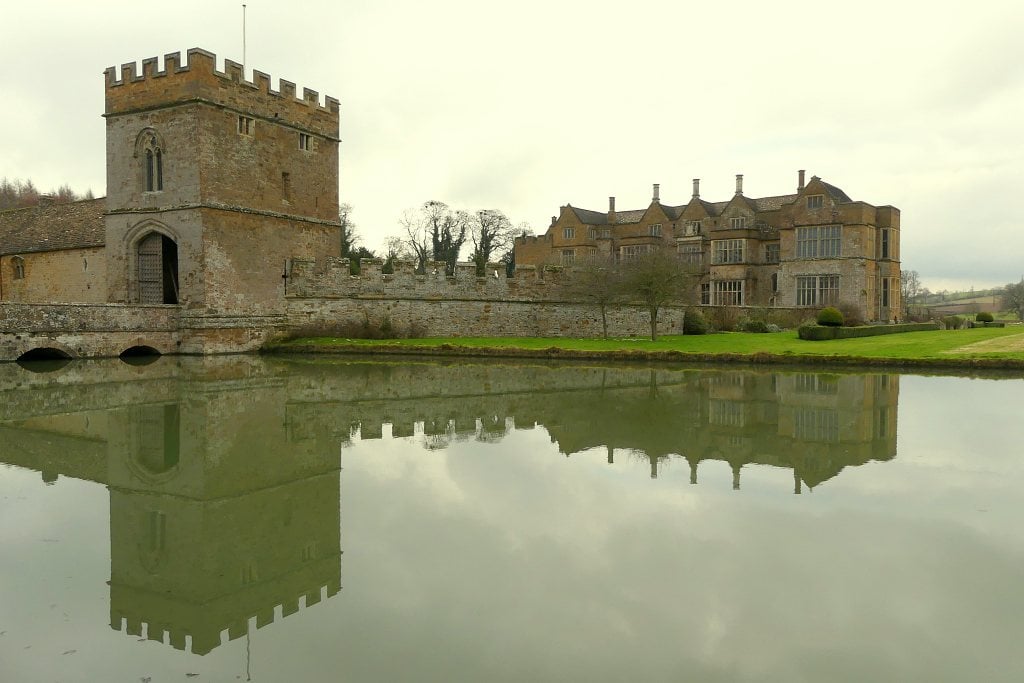 Broughton Castle is a stunning medieval fortified manor house, that lies in the scenic village of Broughton, which is in close proximity to Banbury in Oxfordshire. The castle was initially built as a manor house by Sir John de Broughton in the year 1300 and it was naturally moated; it was later sold in the year 1377 to William of Wykeham, who was the Bishop of Winchester, and it has remained in this family since then.

In 1550, the castle was renovated from the medieval manor house that it started out as into the contemporary Tudor style; many grand features were added, such as impressive windows and turrets. The castle combines an array of different architectural styles, both externally and internally, such as the 14th-century chapel, which is in the Gothic style, and then other parts, that are grand and Renaissance in inspiration.

Style: A range of different styles 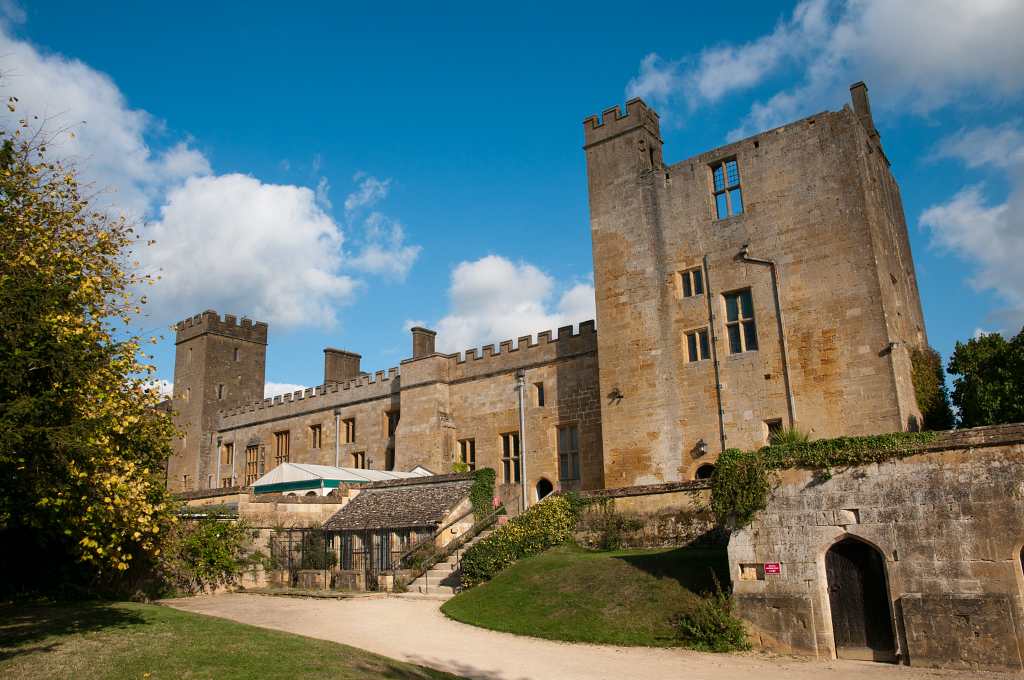 Situated near to the town of Winchcombe in Gloucestershire, in the midst of luscious grounds and nature, lies the stunning Sudeley Castle. The castle that exists today was originally built during the 15th century, upon the grounds of a previously existing castle, that is believed to date back to the 12th century.

Some of the highlights of Sudeley Castle and its grounds include the enormous gardens, which was incredibly well-maintained, and are full of beautiful trees and flowers; there is also a stunning chapel called St Mary’s Sudeley, which is interestingly where Queen Catherine Parr is buried, who was the sixth wife of King Henry VIII. Sudeley Castle is a Grade I listed building, and is incredibly important culturally; today, it is open to the public.

Check out: Famous castles to visit in England. 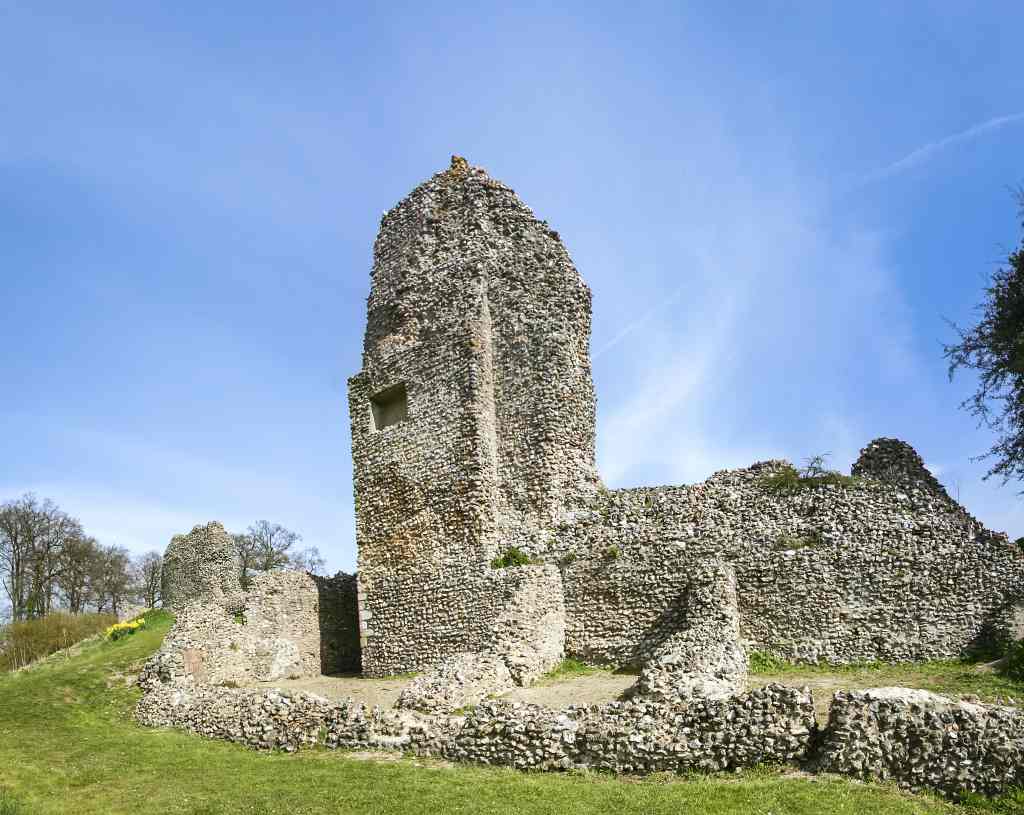 Located in the town of Berkhamsted in the scenic county of Hertfordshire, lies Berkhamsted Castle, and it is a historic Norman motte and bailey castle. It was originally built with the purpose of maintaining control of a key trading route that ran between London and the Midlands, during the era of the Norman conquest of England, which was in the 11th century.

It is believed that construction was overseen by Robert of Mortain, who was the half brother of William the Conqueror, and he also became the owner of the castle. The castle underwent a large amount of military conflict throughout the years, and played a key role in many battles; in turn, it was heavily damaged on several occasions, and rebuilt in the style of the time, giving it a range of different style today. 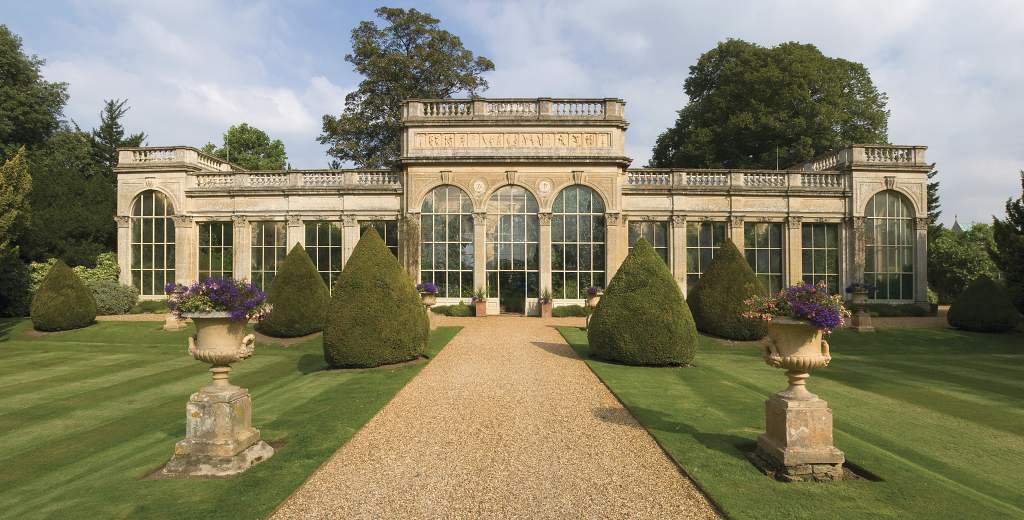 Capturing the essence of the traditional English country house, Castle Ashby House is a historic mansion in Castle Ashby, in Northamptonshire in England, and is famous for being one of the seats of the Marquess of Northampton. The very original castle was built in approximately the year 1306 by Walter Langton, who was the Bishop of Coventry after he wanted to expand his mansion.

The castle that exists today was largely constructed in the 16th century, by Henry Compton, who was the 1st Baron Compton, and then later was continued by his son. Interestingly, the castle was visited by Queen Elizabeth I in the year 1600, and it was also stayed in by King James and his wife in the year 1605. Today, the castle is a popular site to visit and explore, as it has so much history to offer, and it is architecturally beautiful as well. 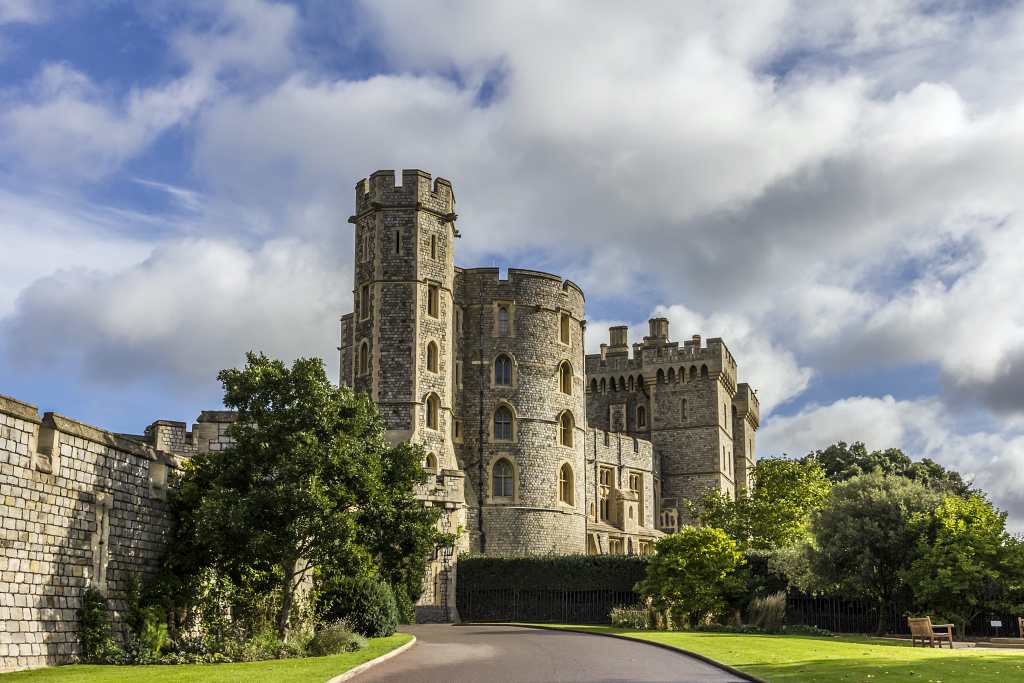 Located in the town of Windsor in the county of Berkshire lies the royal residence of Windsor Castle, which is a world-famous castle, and universally recognised for its associations with the British royal family throughout history.

The original castle was built during the Norman invasion of England by William the Conqueror, during the 11th century; it had the original function of protecting the Normans in the outskirts of London, as well as being a defensive presence, and overlooking the key part of the River Thames.

During the English Civil War, the castle functioned as the Parliamentary military headquarters, and also imprisoned Charles I; Charles II later rebuilt a large portion of the castle in the grand Baroque style that was so popular during the 17th century.

Today, the castle is a very popular tourist destination, as visitors are fascinated by the vast history that is present at the site, as well as the immense and wonderful grounds, which make for the perfect place to embark on an afternoon stroll and soak in the heritage.

You might want to check out the best castles near London. 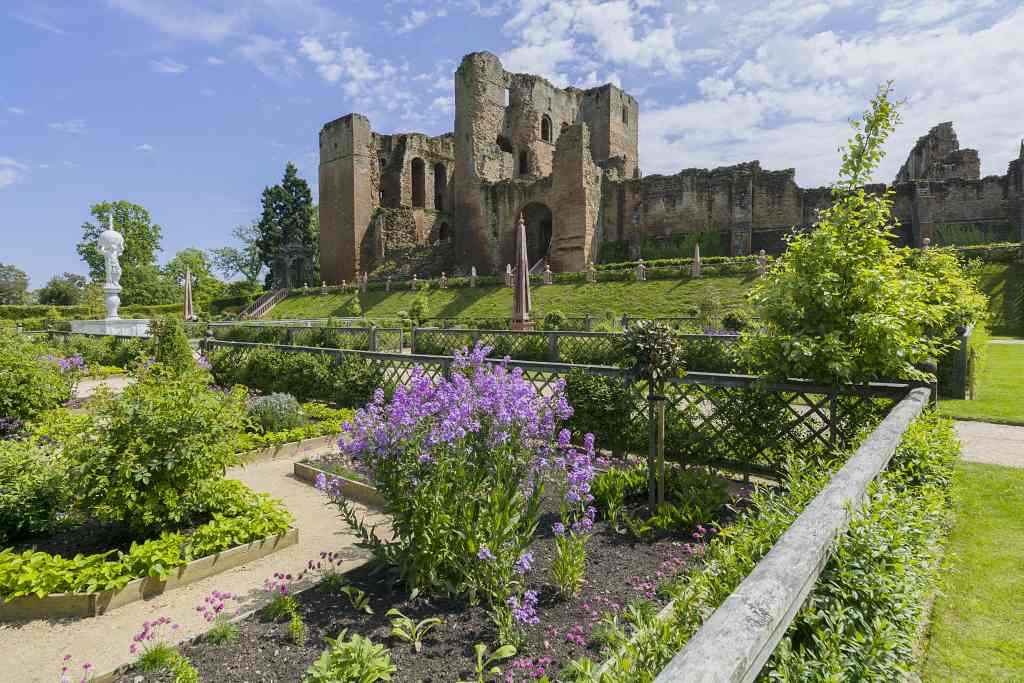 Located in the gorgeous English town of Kenilworth, which lies in the Warwickshire country of England, lies the beautiful Kenilworth Castle, as well as the stunning Elizabethan Garden that is also on the site. The castle was originally founded in the early 1120s by Geoffrey de Clinton, who was the Lord Chamberlain, and also the treasurer to Henry I.

Up until the 18th century, the castle was in its prime, and played pivotal roles in many important battles and military conflicts, before being abandoned and left to ruin. During the 18th and 19th centuries, the castle was largely used as a farm, but was becoming increasingly used as a tourist attraction; the cultural importance of the castle also rose after Sir Walter Scott visited, and wrote ‘Kenilworth’ in 1821, which painted the castle and its history in an incredibly romantic way, and has captured the imagination of many visitors since. 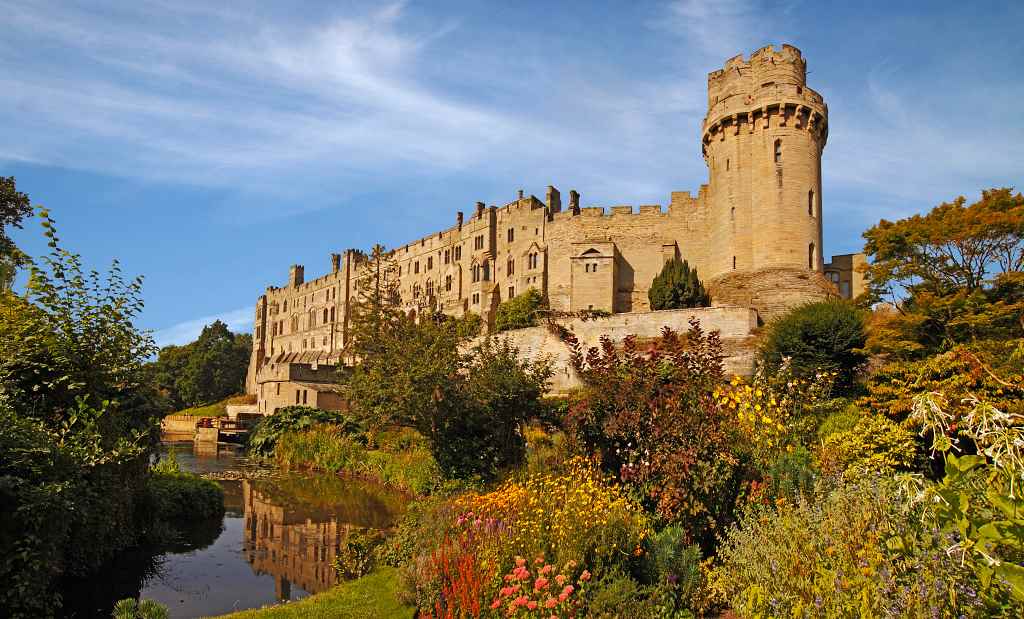 Like many English medieval castles, Warwick Castle, which is located in Warwick, in Warwickshire, England, was originally constructed by William the Conqueror, and it was built in around the year 1068. The original castle was built as a wooden motte and bailey structure, but this did not hold up to military needs, and it was rebuilt in stone during the 12th century.

Warwick Castle has a very stereotypically medieval façade, as it was built during the 14th century, after having been refortified after being heavily damaged during the Hundred Years War. The castle functioned as a stronghold until the 17th century, that was until it was granted to Sir Fulke Greville, by James I; it was at this point that it was transformed into a country house by the family, who later became Earls of Warwick during the middle of the century. Today, the castle is owned by the Tussauds Group, and is open to the public. 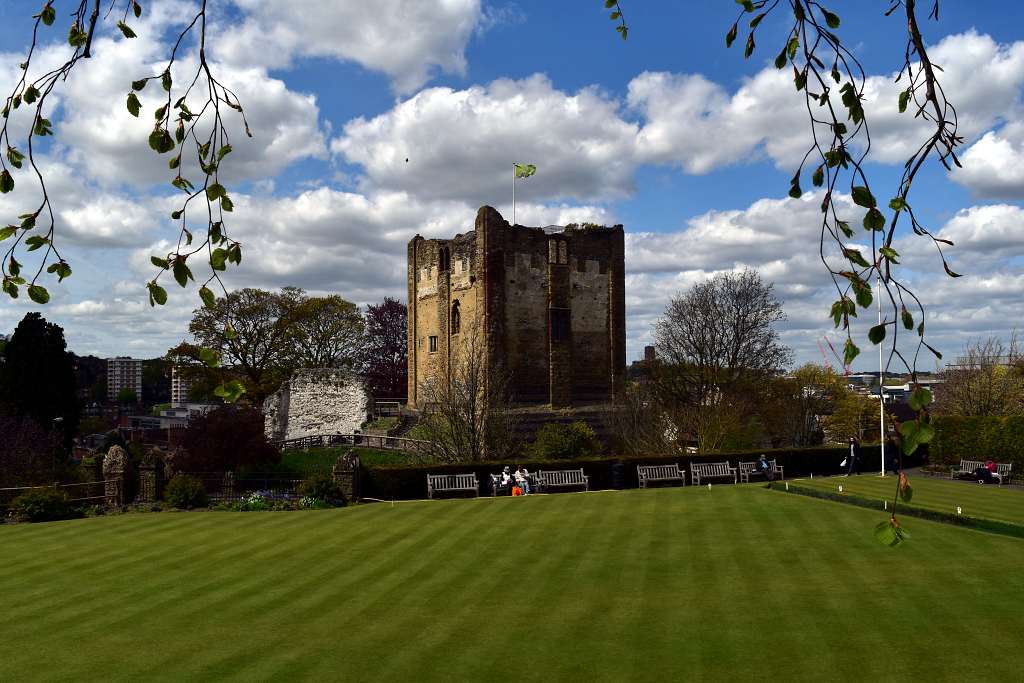 Located in the town of Guildford, in the stunning English county of Surrey, lies Guildford Castle, which is am impressive and historic medieval fortress. Guildford Castle is believed to have been built by William the Conqueror, shortly after the famous invasion of England, in the year 1066.

Primarily used as a royal residence throughout the centuries, it did also play the role of a fortress from time to time, though very much less so than other castles in England, as it was never attacked. It did play a key role in the English Civil War however, where the castle’s defences were strengthened.

Today, many visitors come to Guildford Castle for a day out, to explore the lovely town, and to soak in some local history; there are also some beautiful gardens, that feature a beautiful array of flowers, such as the original moat, which is now bursting with colour. 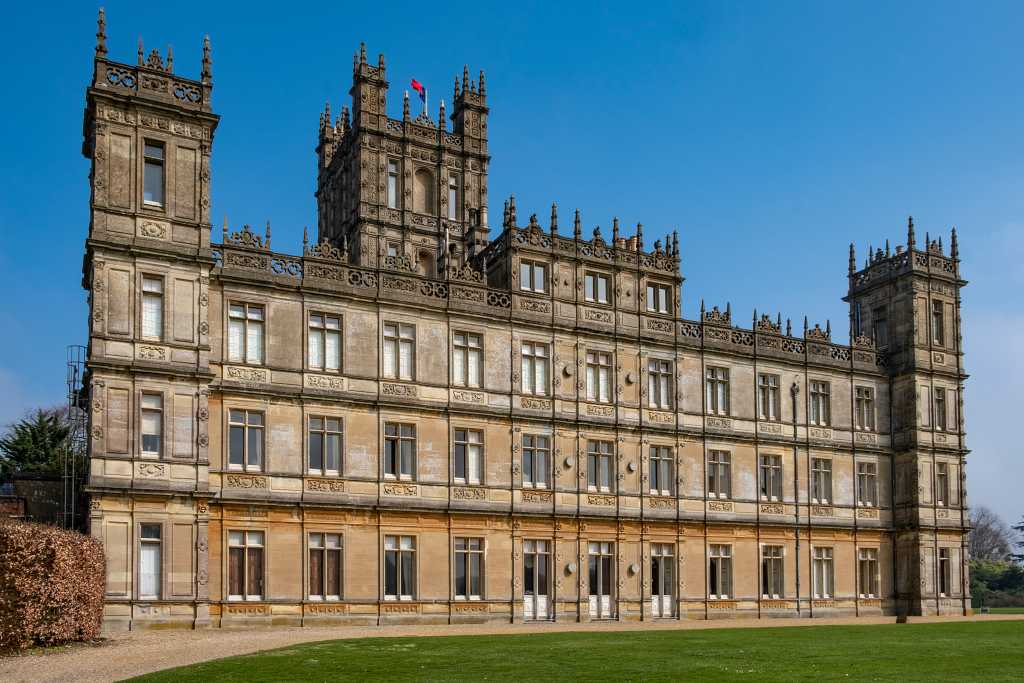 Located in the county of Hampshire in England, lies the incredibly famous and easily recognisable Highclere Castle. The house that exists today is built upon the site of an earlier structure, that dates back to the Middle Ages, and is believed to have been the palace of the Bishops of Winchester, who owned the site since the 9th century, as was recorded in the Domesday Book.

The house that stands today was built in the 18th century, and was designed by Capability Brown; it was later renovated in the 19th century by Charles Barry, in the Jacobethan style. Architecturally, this castle is incredibly impressive, and it stands amazingly tall and proud in the surrounding grounds. In modern-day, the castle is famous for being the setting for the popular series, Downtown Abbey, which attracts many visitors annually. 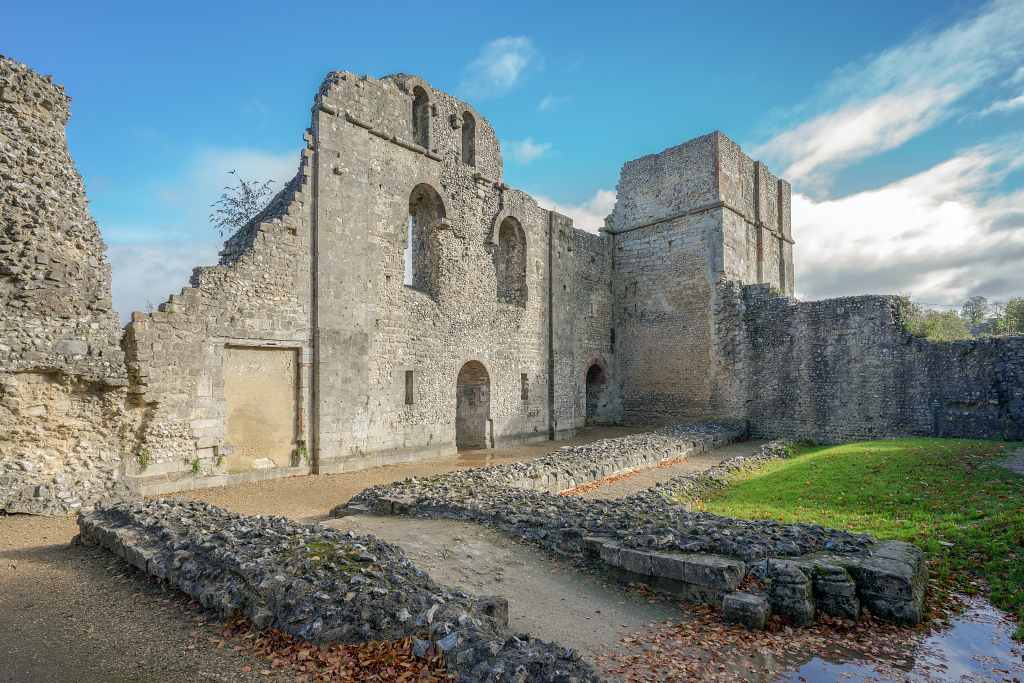 Located in Winchester, which is in the Hampshire country of England, and right next to Winchester Catherdral, lies Wolversey Castle, which is a ruined castle, sometimes referred to as the Old Bishops Palace.

The original castle, on the same site, was built in approximately the year 970; later in 1110, William Giffard, who was the second Norman bishop, built a new hall on the site, which was later added to between the years 1135 and 1138 by Henry of Blois, who was the brother of King Stephan.

Later, in around 1684, a new, grand baroque palace was constructed for George Morley, under the leadership of Thomas Finch, and it was incredibly impressive. Today, the castle is open to the public, who enjoy exploring the grounds, and uncovering the many layers of history.