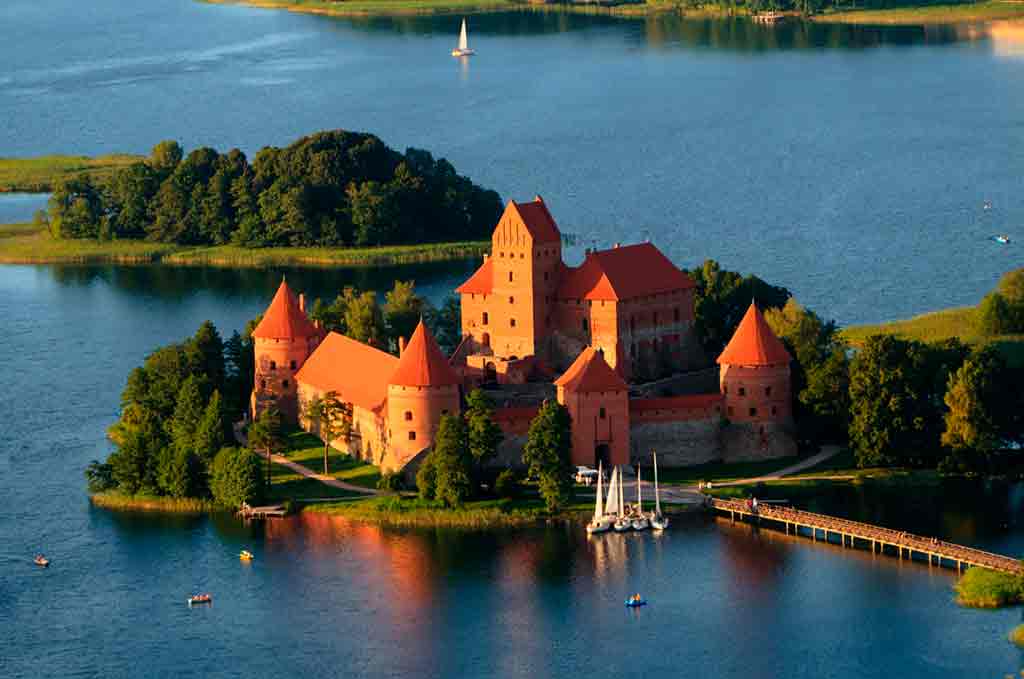 From Medieval to modern, the fairytale-like castles of Lithuania are a delightful way to uncover the history of this country, most of them being built on or by water which makes them a photographer’s dream come true, the red-brick architecture reflecting so beautifully in the water.

Located on the Neris River, the castle complex of Vilnius consists of 3 parts; upper, lower, and crooked. Gediminas Tower which is now the castle museum with an observation deck from which to admire the panoramic view is all that remains of the upper castle.

The crooked part comes in due to the ruins of the Crooked Castle, a castle that was burnt down in 1390 by the Teutonic Knights whilst the lower castle is the Royal Palace, home to the Grand Dukes of Lithuania over the ages.

The oldest defensive site and the 2nd largest castle in the country, historic Kaunas Castle of which about one-third remains, comes with plenty of legends and ghost stories which you can uncover inside the castle at the museum with interactive exhibitions.

Built to defend against the crusader, Kaunas Castle was besieged by the Teutonic Knights in an attack that lasted 3 weeks. Later, in the 16th century, after the castle had lost its importance, it was used as a prison.

This stunning red-brick castle with turrets is located on an island in Lake Galvė and was built by Grand Duke Kęstutis and his son Vytautas, after his death.

It became the Royal residence of the Lithuanian Dukes and the capital of Lithuania in 1409 when Vytautas moved the state treasury to Trakai Island, this being before the construction of Vilnius castle.

This Dutch-style fortress was built in 1586 to defend the Northern borders from Sweden but it didn’t withstand its aim, being captured twice by the Swedes.

From the end of the 17th century, it became the main seat of the Biržai-Dubingiai Radziwiłł family after their move from Dubingiai Castle.

Today, much of the palace has been restored allowing you to see the palace, gunpowder buildings, and to learn the history of the castle at the on-site regional museum.

The red-brick castle that we see today was built on the site of an old Teutonic castle which was mentioned in an East Prussian legend as ‘The Whit Maiden of the Bayersburg’.

Built as a fortified manor castle by merchant and woodsman Krišpinas Kirštenšteinas, it became a residential castle to his Grandson who was the secretary of the Lithuanian Grand Duchy Treasury and today.

Today it is a secondary school but visitors can still visit to climb the 33.5-meter tower to enjoy the view over the Nemunas river.

Where: Raudonė
When: 16th-19th century
Open for visit: Yes.

Originally a Teutonic hill fort, the Panemune castle that we see today (also known as Vytėnai Castle) was built between 1604-1610 on the bank of the River Nemunas by Hungarian nobles of the Eperjesz family.

The largest enclosure type castle in the country, Medininkai Castle today is basically a walled enclosure with a 5-story tower.

Visitors can learn the history of the castle at the 4 exhibition halls before continuing to the top of the tower where an observation deck looks out across the Medininkai Highlands.

Where: Medininkai
When: 14th century
Open for visit: Yes.

More a manor house than a castle, Raudonvaris was a luxurious gentry home built on the site of a much older Pagan keep. A bit of a hidden gem for tourists, it is situated within a 3.8-hectare park.

Visitors can access the castle, orangery, ice house, and stables which have all been restored to their former glory. Take a guided tour if you can so that you can hear the 400-year-old history come to life.

Located on the edge of Siesikai Lake, Siesikai Castle was built by Gabrielius Daumantas-Siesickis as a residence rather than a fortress making it what can be described as a manor castle. Currently being restored, it sits within beautiful parkland with stunning lake views.

Where: Siesikai
When: 16th century
Open for visit: No