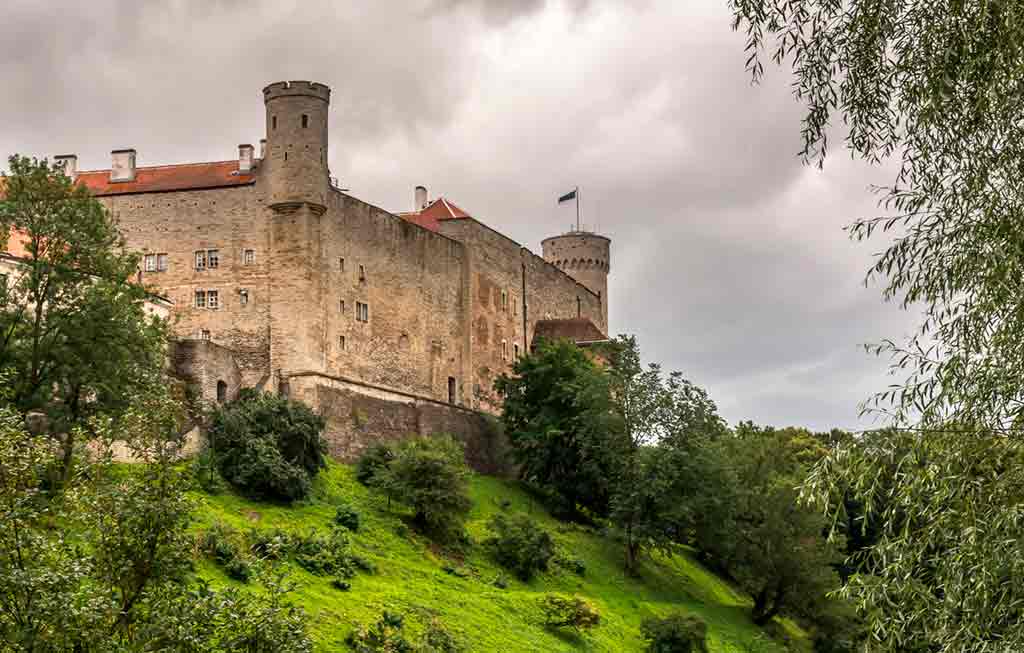 Estonia might be a small country but it’s full of fortresses, castles, and manor houses just waiting to be explored. From the grandeur of the Estonian parliament building to the scant yet nevertheless, picturesque remains of the Medieval fortresses and castles, this country that has been ruled by Germans, Danes, Swedes, and Russians allows visitors to walk amongst the ruins of 900-year-old buildings as they piece together the county’s turbulent past.

In picturesque surroundings at the top of a steep slope surrounded by trees, you will find the remains of Helme Castle. Owned by Germans, Russians, Lithuanians, and Swedes, legend has it that a young girl, a virgin, was entombed within the castle walls to help strengthen it!

Originally oval-shaped with 2 moats, there isn’t much left to see of the castle today, just partial walls with holes where the window was as the castle was destroyed by the Swedes in the Russian-Swedish war in 1658.

Knight’s Castle Keila-Joa Schloss Fall located next to Keila River just 26 km from Tallinn. This 19th century castle, is open to visitors and houses a museum, and a hotel.

The iconic ruins of this castle date from the 14th-15th century when a fortress was built to defend the Eastern borders by the Order of the Livonian Knights.

It was the first fortress in Estonia to be fitted with firearms, the cannon towers built in the 15th century when the castle was strengthened and adapted.

Caught up in many wars and battles involving the Swedes, Russians, and Polish, Laiuse Castle finally fell into total disrepair in the 18th century with the Great Northern War.

Originally built for the Danish King’s vice-regent, Hermann Castle became German Teutonic in 1346 when the German Livonian Teutonic Knights purchased the castle from the Danes making this the northernmost defensive point of the Teutonic Order until its capture in 1588 by the troops of Ivan the Terrible.

It is the best-preserved defense structure in the country spanning 3.2 hectares complete with 51 meters high Hermann Tower. The castle museum explains the history of the castle whilst outside in the courtyard visitors can get practical, trying a variety of handicrafts and techniques dating back to the Middle Ages.

Hermann Tower was constructed in 1265 for Konrad von Mandern, master of the Livonian Order, using local white limestone and became a symbol of Paide and Järva County.

The medieval citadel was besieged multiple times by the Russians at the start of the Livonian War, the octagonal tower, which measured more than 30metres tall, finally destroyed by the Red Army when they retreated in 1941.

The tower was restored to its former glory in 1993 to mark the 650th anniversary of the St George’s Night Uprising and now contains the castle museum.

Where: Paide, Järva
When: 13th century
Open for visit: Yes.

Located beside the river, a historical stone fortress built in 1272 originally stood here and became the Royal residence of King Magnus for 8 years. In the 18th century, a grand rococo-style palace, the remains of which we see today, was built by Woldemar Johann von Lauw along with a church, the tower built into the old fortress cannon tower.

Both buildings burnt down in 1941 but the church has since been restored with the courtyard surrounded by castle ruins containing the  Põltsamaa history museum, the Estonian Press Museum, and an art gallery.

Otherwise known as ‘The Red Tower’ (not to be confused with the church which also has a red roof), this is the last defensive tower to remain of the Teutonic castle-fortress that once surrounded this historic town.

Although one of the most important Medieval cities of Livonia, the castle was destroyed during the Livonian War and then the Polish-Swedish war leaving only the tower, which was used as a prison, visible today.

Built by the Danes for Danish kings and used by the knight-monks of the Livonian Order and the Swedish and Polish states, today Rakvere Castle is somewhat of a Medieval theme park! Enter the castle ruins and find yourself transported back in time to the Middle Ages with costumed actors bringing medieval times to life.

See the torture chamber, alchemist’s workshop, barber’s shop, and the adult’s only medieval brothel museum before trying your hand at jousting, archery, and mock sword fights. Demonstrations also take place around the grounds with candle making, minting copper coins, and a lesson on making gun powder.

The site of an ancient stronghold since as far back as the 9th century, Toompea Castle has been the seat of power for the nation for 7 centuries and today houses Estonia’s parliament.

Viewed from the front, the castle looks regal with its 18th century pink baroque façade designed by Russian empress Catherine the Great but viewed from the back visitors can see the historical Knights castle with its 3 surviving towers from the 14th century.

Located on the North Coast, the picturesque shoreline ruins of Toolse Castle are a sight to behold. Built to protect Toolse harbor from pirate and other attacks, the castle was initially a fortified manor house before a more substantial crusader castle belonging to the Teutonic Order was built, the ruins of which we see today. In the hands of the Russians and the Swedes during the Livonian War, it was destroyed in the 18th century during the Northern war.

Located on the shores of Lake Peipsi, stand the scant remains (just 3 main walls and some scattered outer ruins) of a Livonian Order Castle, once the seat of the Teutonic Knights.

The castle remained in the hands of the Order of the Knights until 1558 when it was given to the Muscovite troops, falling into ruin in the 17th century.

Built on the site of an older hill fort overlooking beautiful Lake Viljandi in 1224 Fellin Castle, as it was known, became one of the strongest and most distinguished castles in Livonia belonging to the Order of Livonian Brothers of the Sword before it became part of the Teutonic Order.

The castle was captured by the troops of Ivan the Terrible in 1560 after a long siege and, already badly damaged, was ultimately destroyed during the Polish-Swedish wars in the 17th century.

Today the castle ruins, with just some walls remaining, are a recreational area for locals set within a park with one of the entrances accessible by crossing a 50-metre suspension bridge.

The main gate and a 25-metre long section of the walls are all that remain of this ruined castle which dates back to 1340 when it was a stronghold but its parkland surroundings make it a pleasant place to relax.

Initially belonging to the Tödwen family, the castle changed hands multiple times during the 16th century before becoming the Southern Estonia centre of the Jesuits until 1625.

It was destroyed in 1558 on the command of the Livonian Order during the Swedish-Russian conflict, much of the stone from this castle going to build a new castle.

Better known as Alatskivi Castle, this white fairytale-like castle, actually a manor house, was built in the 1880s by Baron Arved von Nolcken and is based on the same design style as Balmoral Castle in Scotland hence the reason it looks like this castle has been dropped down into the wrong country!

Step through the castle’s doors on a guided tour as you discover the history of this aristocratic family with costumed actors helping bring history to life.