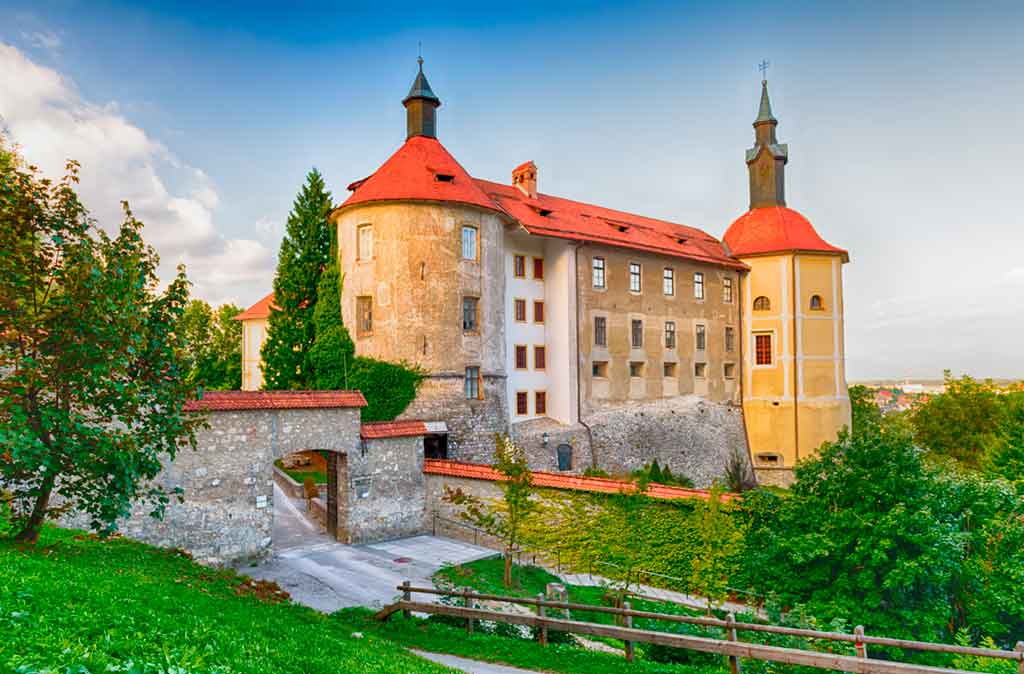 Slovenia has some of the most beautiful and amazing castles in the world but few foreign visitors go off the beaten tourist trail to explore the culture this country contains, mostly sticking to Bled Castle, Ljubljana Castle, and the unique cave castle of Predjama.

But Slovenia has approximately 500 fortresses, castles, and manor houses scattered across the country and they contain marvellous medieval, Renaissance, and Baroque architecture so take the time to explore the architecture and history of Slovenia, you won’t be disappointed!

This medieval castle, the oldest in the country, is built on a 130-metre high cliff overlooking Lake Bled.

Dating as far back as 1004, at which point the castle consisted of just the Romanesque Tower protected by a wall, it was rebuilt as a fortress around 1011 but what we see today was not built until 1511 after an earthquake badly damaged the previous castle.

Today the castle is used for many cultural events with visitors able to explore the history of the castle in the Memorial Room and the Museum. The Gothic Chapel can also be visited as well as the Tower which is now used as a gallery space.

Built on a hill above Ljubljana city centre, the castle complex that we see today dates from the 15th-17th century but is built on an older 11th-century Medieval fortress.

Take a guided tour of the castle and let the costumed actors take you back in time or, choose to wander at your own pace with an audio guide.

The Outlook Tower and ramparts provide spectacular views across the city whilst the on-site museum will help you understand the history of Slovenia and a video presentation helps you understand the history of the castle. You can also visit the Dungeons and the Chapel of St George and there’s an on-site puppet museum that the kids are sure to enjoy.

The place where man and nature come together, Predjama Castle is an astonishing 4-story fortress built into the cave mouth located 123 meters up a cliff.

A Medieval marvel and the largest cave castle in the world, 800-year-old Predjama Castle needs to be seen to be believed! Step inside on a tour as you discover the once-secret network of tunnels from which rebellious Knight Erazem (Slovenia’s very own Robin Hood) would depart on his plundering expeditions.

Once the seat of the Counts of Celje (the most influential noble dynasty of that territory at the time), this castle, which is actually a ruined fortress, is known as the old or upper castle in Celje.

A castle has stood on the site, located on the 407-meter high escarpment, since the 13th century but what we see today mostly dates back to the 15th and 16th centuries when the first Count of Celje moved in. Climb the 23 meters tall Frederick’s Tower to admire the view whilst learning the Romeo and Juliet style love story of Friderikov and Veronika.

Loka Castle was the home of the Freising Bishops and dates back to the 12th century though what we see today is from the 16th century, an earthquake in 1716 destroying much of the earlier castle.

Now containing the Loka Museum which has cultural and historic exhibitions of the area, visitors can cross the renovated castle drawbridge to admire the grounds of this circular castle with the North-Eastern tower which is built on an older 10th-century tower, the glistening 17th century chapel with 4 golden alters, and a typical 16th-century peasant house called Škopar’s House which is an open-air museum.

One of the most beautiful and best-preserved castles in the country, Sneznik Castle is located on the edge of a forest with views overlooking meadows and a small pond.

On a guided tour visitors can enjoy its 4 floors of period furniture, artwork, hunting trophies, and other personal effects, the belongings of the Schönburg-Waldenburg family who were Saxon Princes and who used the castle as a summer residence and hunting lodge from 1853 until 1939.

Comprising of the Entrance Tower, a part of the defensive wall which leads to the fortified settlement, the Square Tower which used to be the castle chapel, and The Tower of Kobdilj which was a guard tower later transformed into a Summer dining room, visitors can wander around the streets and grounds of this old castle settlement taking in the finer details such as the fountain dating back to 1694 and the coats of arms on the exterior walls.

Owned by many families over the centuries, it was originally owned by the Counts of Gorica after which the Counts of Cobenzel took ownership for the most number of years until 1661 during which time they made many alterations giving the castle its present look.

As well as a home the castle has been used as a military hospital, school, library, and medical centre.

Most well known for being the home of poly-historian and scientist Johann Weikhard von Valvasor who was a member of the Royal Society of London and the author of ‘ The Glory of the Duchy of Carniola’, visitors can step inside Bohensperk Castle to learn all about this man, seeing his study, printing workshops as well as the country’s main geodetic collection along with a collection of traditional national costumes and hunting memorabilia.

A castle has stood on this hill overlooking the Old Town since the 12th century but what we see today mostly dates to the 16th century when Innocenz Moscon rebuilt the castle.

Visitors can take a guided tour around the stunning interior of Sevnica Castle to learn its history and its secrets, admiring the Baroque fresco paintings, one of which shows the Four Seasons in the 2nd-floor room of the South-east tower with other impressive frescoes located in the vaulted cellar which was used as a secret Lutheran chapel. The museum informs guests about the castle’s history and contains a gallery too.

This stately fortress, former home of the aristocratic family Attems, contains the breathtaking Great Hall aka the Knights Hall which is decorated with Ovid’s Metamorphoses and other legends (1699–1703) by Frančišek Karl Remb.

It is a true masterpiece, one of the country’s most beautiful Baroque painted halls and also the largest. The castle is also home to the Posavje Museum which gives visitors an insight into the castle’s history as well as the people of the town with art and historical artefacts on display.

This small yet very picturesque fortified castle with its 7 terracotta towers rising high above the Krka River is located on the site of an older 13th-century castle.

Badly damaged in WWII it has been beautifully restored over the years with the towers, walls, roof, wine cellar, and courtyard all accessible to visitors.

Where: Zuzemberk
When: 17th century
Open for visit: Open to the public during special cultural and tourist events in the Summer months.

This stunningly beautiful water castle is located on an island in the middle of the Krka River. Converted into a hotel, restaurant, and event venue with a gold course, Otocec Castle is the only water castle in the country.

Originally the castle was located beside the river when it was the home of the Knights of Otočec and from the 15th century, other noble families.

Excavation which was meant to fix security concerns caused the river to change course resulting in the castle now sitting on an island within the river.

Where: Otočec
When: 13th century
Open for visit: Only for guests/visitors using the castle facilities. Check here for more information.

This former monastery, described as ‘the castle which defied centuries’ is home to the Technical Museum of Slovenia. It was one of four Carthusian monasteries built in the territory of Slovenia in 1255 but was damaged by fires and a strong earthquake in 1670.

The final blow came in 1782 when Emperor Joseph II commanded the dissolution of the monasteries which did not contribute to the wealth of Slovenia and so it was sold off in pieces, the Galle family becoming owners of the grounds in the 19th century and the main part of the building being turned into a manor house.

This lowland castle dates back to the 14th century when it was the property of the provincial prince but was rebuilt at the end of the 17th century by the Vetters in the renaissance style with the park a later addition by the Wildenstein’s before the Attem family added the baroque features that we see today including the chapel and Knights Hall.

The interior has been renovated over a period of 20 years to house the Slovenska Bistrica cultural centre whilst allowing us to see what this baroque manor house would have looked like in its prime.

This picturesque castle, also known as Rihemberk Castle, has only recently opened to the public after extensive renovation work which is still ongoing.

Built on the site of a Bronze-Age fort, the castle was built for the Patriarch of Aquileia to control a route across the mountain and was subsequently owned by the Reifenberg’s and the Counts of Gorizia before it became the ownership of Habsburg Emperor; Maximilian I at which point many renovations took place, the same family owning the castle until the end of WWII.

Only the picturesque watchtower and some sections of the wall survive intact at Kalec Castle which was built on the 618 meters high Breg slope close to the Pivka River for the Noble Steinberg family.

It is most well known for being the place where composer Miroslav Vilhar died and is also noted for hosting a meeting of the antifascist militant group TIGR by which point it had been abandoned and was falling into disrepair.

Where: Bač
When: 17th century
Open for visit: Grounds accessible 24/7

The 2nd largest castle complex in Slovenia, Kostel Castle sits on a steep hill overlooking the Kolpa River. Built on the site of an older fort for the Counts of Ortenburg the castle complex became a border fortification against Ottoman invasions during the 15th-16th centuries, it was attacked multiple times but was only conquered through deception when the Ottoman soldiers dressed up as peasants pretending to be in need of refuge.

The Ottomans set light to the castle and it was further destroyed by Napoleon’s troops and then again by Partisans in 1943. The castle has since been completely restored now is a place for cultural events with guided tours also available.

Where: Kostel
When: 12th century
Open for visit: Open weekends and during festivals/events.

Otherwise known as Rajhenburg Castle or Brestanica Castle it might not look like much from the exterior but the castle has been completely renovated inside and has a fascinating history.

From 1881 Trappist monks from France lived at the castle and developed it extensively. The monks were only allowed to communicate with their hands but made everything they needed to enjoy a modest life themselves and they also made and sold cheese, chocolate, and liqueur.

In 1941 the castle was taken over by the Germans and became a deportation camp for Slovenes, 65,000 out of 80,000 being deported from this castle. Today the castle is a museum, gallery, and cafe/restaurant where you can try the traditional wares of the Trappist monks.