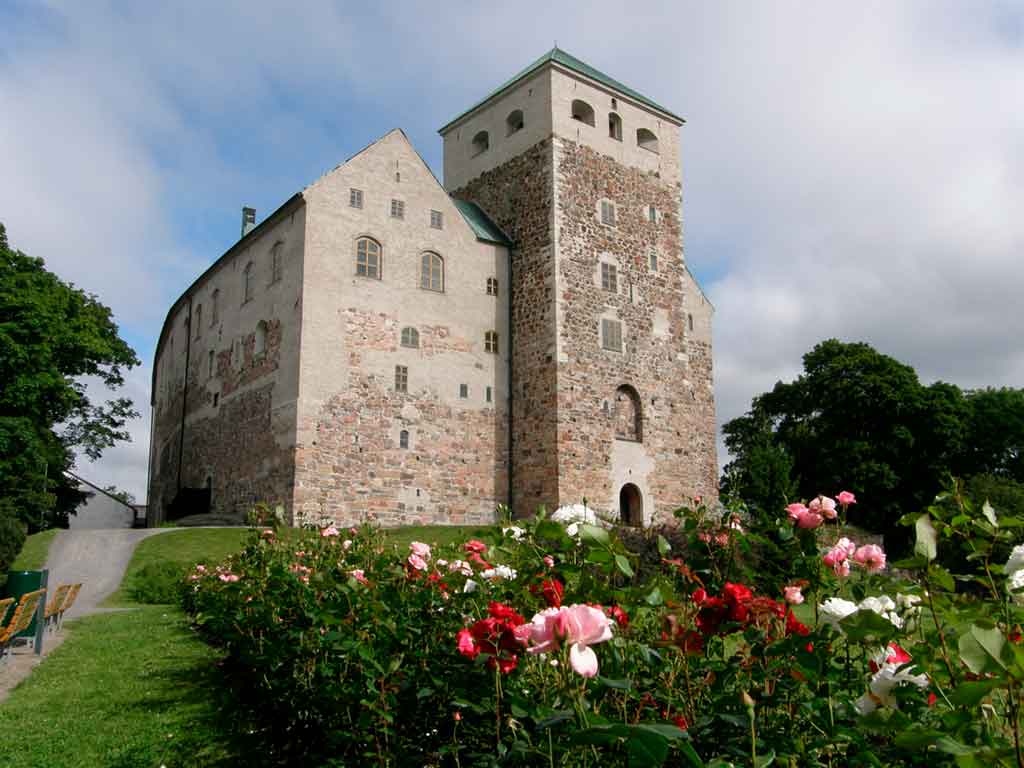 A trip to Finland wouldn’t be complete without visiting a few of its beautiful castles and fortresses, some of which date back 900 years, so step out of that picturesque log cabin and go on a journey back to the Middle Ages.

More interested in 18th-century history? No problem, there’s no better way to admire the Finnish landscape than from a sea fortress or island castle whilst getting to understand the history of this country that was controlled by Sweden and Russia for many years.

Read on and let us help you decide which castle in Finland you’ll visit first.

Known locally as Olavinlinna, this beautiful castle with its three towers is the most Northern medieval stone fortress still standing. Built in an idyllic location, on an island in the Kyrönsalmi strait, St Olaf’s Castle (originally known as Nyslott which means ‘New Castle’) was built to help neighbouring Vyborg Castle defend the Eastern border from the threat of the Grand Duchy of Moscow.

It was the first Swedish castle built to withstand artillery fire and was meant to guarantee the control of the Savo region for the Swedish Crown who controlled Finland at that time.

The largest surviving Medieval castle in Finland, it is also one of the oldest buildings in the country still in use and has served many purposes over its 700-year history, from a defensive bastion to a majestic court, an administrative centre, prison, storehouse and a barracks, today being one of Finland’s top tourist attractions.

Let a costumed guide lead you around the maze of passages as you see the Renaissance halls from the time of Johan Duke of Finland and learn the love stories, celebrations, battles, and everyday castle life that went on during Medieval times.

Built as a military fortress, only later becoming a Royal Castle and administrative centre, Häme Castle or Tavastia Castle as it’s otherwise known, originally stood on a small island in Lake Vanajavesi, in the border zone between Sweden and Novgorod but today the island has gone and the castle stands on the coast of the lake.

Step inside on a guided tour to see the restored 15th century King’s Hall and Queen’s Chamber as you learn the fascinating medieval history of this 700-year-old castle.

Spread across 6 bridge linked islands at the entrance of Helsinki’s harbour, this rather breathtaking sea fortress has served to defend 3 different sovereign states over the years, those being the Kingdom of Sweden, the Russian Empire and now the Republic of Finland.

As much a site to enjoy history and architecture with 6km of defensive walls and 200 buildings, several of those now being museums (not forgetting the only remaining WWII submarine!), Suomenlinna is also a place for hiking and nature covering 210 hectares.

Used as a military and administrative centre for the region, Katelholm initially formed part of the Swedish Empire with successive Swedish and Danish governors.

The Castle briefly became the home of Gustav Vasa before he became King as well as Duke John but it was damaged in 1599 by Charles IX troops (Karl IX) followed by a fire in 1745 which saw the castle lose its power.

Today, visitors can enjoy a tour around the castle ruins which is also the site of the Jan Karlsgården Open-Air Museum where visitors can learn about local life in the 19th century.

Thought to have been founded as a defence fort by Hermann of Dorpat, the successor of Albert of Riga, and Livonian Brothers of the Sword after the Livonian Crusade, Raseborg Castle later became a royal castle used as an administrative centre for Western Uusimaa and the luxurious home of the court under King Charles VIII of Sweden.

Today, visitors can see the Knight’s Hall and roam the passageways learning the history contained within the castle’s walls before admiring the surrounding landscape from the viewpoint.

Constructed by the Russians since Åland belonged to Czarist Russia back in 1832, Bomarsund fortress was meant to be a strategic fortress that provided the Czar with a strong military presence on the island.

However, the fort was never completed as the Battle of Bomarsund took place in 1854, during the Crimean War, resulting in its destruction.

The fortress has stood in ruin since that time but the nearby museum offers plenty of history of the castle with background on the Crimean War and the road to peace.

This ruined sea fortress lies on an island in the Gulf of Finland, at the mouth of Loviisanlahti Bay. It was built after the War of Hats which ended in 1743 by Field Mashal Augustin Ehrensvärd who also designed Suomenlinna sea fortress in Helsinki.

In 1809 it was surrendered to the Russians at which point the fort was used as a prison, later destroyed by the British during the Crimean War. Today visitors can visit Svartholm to see the old walls and enjoy the views, a permanent exhibition explains the history of the sea fort.

Where: Loviisa
When: 18th century
Open for visit: Open 24/7 but accessible by public transport June-August Tuesday-Sunday only.

Little remains of this medieval episcopal castle today besides the outer walls but back in the Middle Ages it was the height of luxury featuring modern conveniences from abroad.

Built on an island it was initially a stronghold before becoming the home of the Finish Catholic Bishops. Kuusisto Castle was the centre of spiritual life and also yielded plenty of political power during its golden era in the 1400s but when the Reformation came in the 1520’s King Gustav Vasa ordered the castle to be destroyed.

Originally a wooden structure built as a late defence castle (and thought to have stood on the site of an older Medieval castle) the Oulu Castle that can be seen today (actually an observatory rather than a castle) dates back to 1857 which replaced the fire destroyed wooden structure.

Housing a cafe and an exhibition centre today, the observatory/castle is a great place to relax and enjoy the view and you can still see a few remnants of the earlier fire-destroyed castle.

This large fortress complex is the gateway between East and West, the place where Finnish, Russian and Swedish cultural heritage comes together.

It contains the oldest Russian Orthodox church in the country and a number of original buildings from the 18th century including the guardhouse at the main gate, and the Commandant’s House.

Several museums including the Cavalry Museum, art galleries, shops, and restaurants are all found here today and in the Summer, this fortress is where the sand sculpture festival and music events are held.