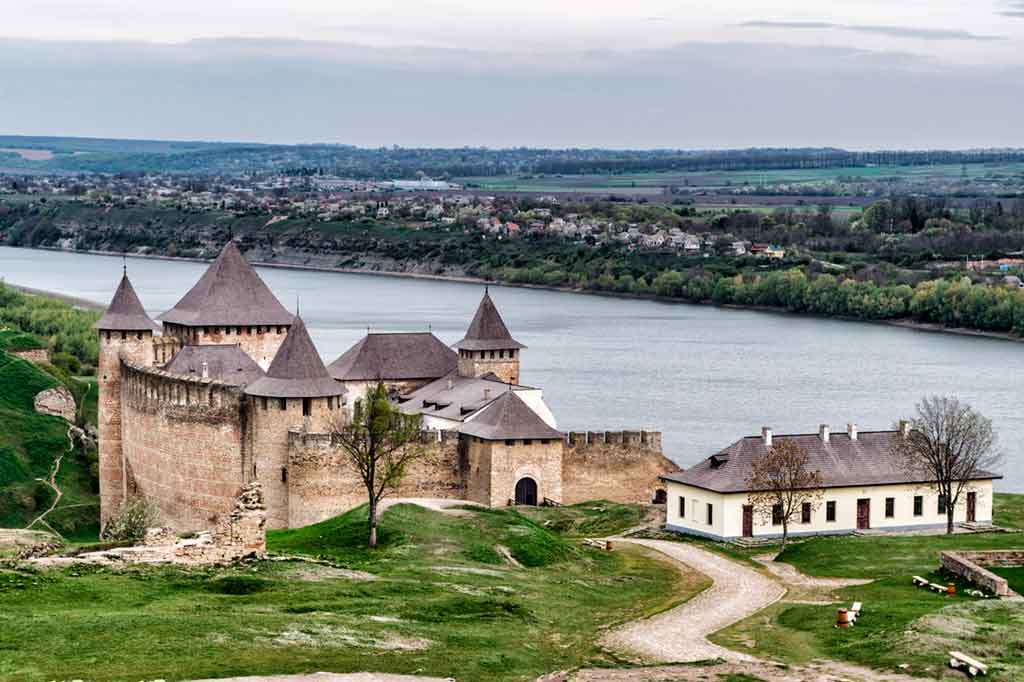 The eastern European country of Ukraine is not frequently at the top of budding travellers’ lists of places to visit, but this list of its best castles will change your mind; it is an up and coming travel destination, with an abundance of beautiful historical castles with a rich and exciting heritage, with the added bonus of fewer tourists, and therefore fewer queues and more freedom to explore without hindrance.

This list will highlight some of the country’s most astonishing castles, their key features, as well as practical information, such as their location, and opening times.

13 Castles to Visit in Ukraine

Constructed by the noble Buchacki family between the 14th and 15th centuries, Buchach Castle is now a ruined medieval castle, located in the Ternopil Oblast region of Ukraine.

However, since its original construction, it was left to rot and decay and was later rebuilt in the 16th and 17th centuries by the Potocki-Movile family, in the contemporary Renaissance architectural style.

Again, however, it was left to decay, and it was then partially demolished in the 19th century for the acquisition of materials.

Where: Buchach
When: 14th-century origins
Open for visit: Yes

Situated in Sudak, the Genoese Fortress is one of the best-preserved fortifications, with a history of residency of colonists and traders. The first occupation of the stronghold dates back to the settlement of the Genoese in Caffa, which is today known as Feodosiya, and it was known to be a stronghold of the Soldayya Colony between the year 1371 and 1469.

This castle is absolutely gorgeous, and if you are a fan of medieval architecture and history, there is so much here that is just waiting to be uncovered and explored.

Where: Sudak
When: 14th century
Open for visit: Yes

Iziaslav Castle is a famous, ruined fortress in the town of Iziaslav, which is located in the North of the Khmelnytsky region of the Western part of Ukraine. The castle was originally built in the 16th century and was the fief of the famous Sangusky family.

Today, the castle is completely abandoned, and has a truly eerie yet fascinating atmosphere to it; it seems completely lost in time, and it attracts many curious visitors a year. Unfortunately, one cannot go inside the castle itself, as it is considered to be a safety hazard, but you can admire it from afar.

Where: Iziaslav, Ukraine
When: 16th century
Open for visit: Not open to the general public.

Often regarded as one of Ukraine’s most beautiful and well-preserved castles, Kamianets-Podilskyi has a truly magical and enchanting feel to it. It is generally believed that the castle dates back to the 14th century, however, in recent years, it has been argued that there was human existence at the site during the 12th and 13th centuries.

Throughout the centuries of the castle’s existence, it has been subject to many violent attacks, including the Tartar invasions from the 15th to the 17th centuries, where it was attacked 51 times. The castle has a fascinating past and is visited by many visitors each and every year.

Where: Khmelnytskyi Oblast
When: 12th-century origins
Open for visit: Yes

The Khotyn Fortress has a very long, extensive, yet nonetheless fascinating history, and has also changed its shape and style over the centuries. Its original fortress was constructed in the year 1325, although many important renovations and additions were added in the 1380s, and then again later in the 1460s.

Interestingly, as well as the castle’s vast military history, there are also lots of legends and mysteries attached to the castle; for example, there is a large dark spot on the fortress walls, which is argued by some to have been left there by the Khotyn rebels against the Ottoman Turks that were killed there.

Where: Khotyn, Ukraine
When: 1325 origins
Open for visit: Yes

Situated in the scenic city of Kremenets in Ukraine lies Kremenets Castle, which is built upon a steep limestone hill, and is surrounded by luscious green forestry. Kremenets as a town is believed to have been in existence since the year 1064, and the castle itself was built in the 13th century.

During the middle ages, there was a lot of military action, as its primary function was that of a stronghold fortification; it was also homed to and visited by many important individuals, such as princes, kings, and more. Today, many tourists head to the castle to get further insight into its interesting past, as well as the folklore stories that are attached to it.

Where: Kremenets
When: 13th century
Open for visit: Yes

Nestled upon a large, green hilltop in the Borschiv Raion region of Ukraine, and overlooking the river, lies the ruined Kudryntsi Castle, which was originally built in the 17th century by Jan Szczesny Herburt. Throughout the centuries, this castle has consistently been attacked and sieged, for example, from the Cossacks and the Turks, on numerous different occasions.

By the 19th century, a lot of the castle has been neglected, and parts of it were completely damaged; it was left this way without any intervention and has been ruined ever since. Nonetheless, it is open to visitors, who are still intrigued by its heritage.

Where: Borschiv Region
When: 17th century
Open for visit: Yes

Kiev Castle, or otherwise known as Kiev Pechersk Lavra, is one of the largest castles in the whole of Ukraine; it is also one of the most beautiful and architecturally impressive. Its history begins in the year 1051, where it began life as a cave monastery, and it is a centre of Eastern Orthodox Christianity in Eastern Europe.

There are a lot of incredibly architectural buildings and structures in this castle, including the Great Lavra Belltower, which is 96.5 meters high, and was built between 1731 and 1745, and is built in the classical style by Johann Gottfried Schadel. This is definitely a key highlight to visit when in the city of Kiev.

Letychiv Castle was founded in the year 1362, and it was first mentioned in 1411, due to its role in the Tatar invasions; it is described as a palisade fortress and was moated on all sides.

The castle has a fascinating history, including its role in the Bolshevik Revolution after the year 1917, whereby the territory was occupied by both German and Hungarian troops, until the end of the first World War.

During the Second World War, the castle was seized by the German forces on July 17th, 1941, during Operation Barbarossa.

Locally known as Lubart’s Castle, Lutsk Castle is a stunning mid-14th century castle and began life as the seat of Gediminas’ son, Liubartas, who was the last ruler of united Galicia-Volhynia.

The castle that exists today was mostly built in the 1340s and played a key role as a defence stronghold throughout the entirety of the Middle Ages.

In more recent years, the castle played a significant and horrendous role in the Second World War, where on July 2nd, 1941, 1,160 Jews were killed within the castle walls.

Where: Lutsk, Ukraine
When: 14th century
Open for visit: Yes

With the first mention of this castle dating back to the year 1096 in Vladimir Monomakh’s ‘Guidelines’, the Mykulyntsi Castle is absolutely stunning.

Today, there are remnants of a 16th-century castle that still remains in the town of Mykulyntsi, however, the actual main castle was rebuilt during the 18th century, as it has fallen to disrepair in previous centuries.

However, in the 20th century, the castle was once again left and abandoned, with no use or purpose. Visitors still can come and admire the castle today, however.

Where: Mykulyntsi
When: 17th century
Open for visit: Yes

Nevytsky Castle is a beautiful semi-ruined castle in Zakarpattia Oblast, in Ukraine; the castle is incredibly scenic, as it is located in luscious green woods, on a beautiful hill that has volcanic origins.

The first mention of the castle dates back to the year 1274, during which it belonged to the King of Hungary, Laszlo IV, and was used as both a dungeon and a keep.

However, this castle later fell into disrepair, and it was later rebuilt in the early 15th century and functioned as the powerful stronghold citadel of the Drugeth family.

Where: Zakarpattia Oblast
When: 1274
Open for visit: Yes

From the years 1564 right up until the late 18th century, Olyka Castle served as the principal seat of the Radziwill princely family in Volhynia.

The Olyka Castle has a long and interesting past; it was founded during the 16th century by Prince Mikolaj Radziwill, who then gave Olyka to his youngest son, Stanislaw.

Today, the castle is now a psychiatric hospital, and only a small part of the castle is open to visitors; nonetheless, tourists visit the castle to discover its interesting and varied history, as well as to admire the baroque architecture and wonderful gardens.

Where: Olyka
When: 16th century
Open for visit: Yes

This list has presented the top castles to visit in the gorgeous country of Ukraine. This is a perfect place to visit, as it is not overly filled with tourists, but it does not lack in wonderful sites to see, and it is bursting with a fascinating history.