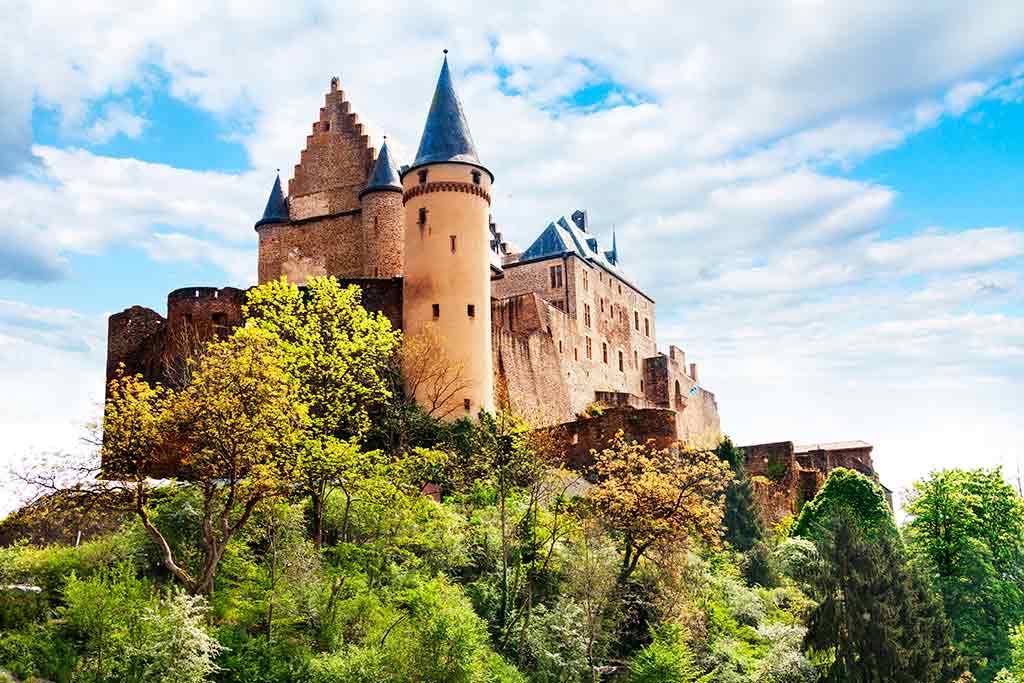 Although it lacks the popularity of its neighbors, such as France or Germany, Luxembourg has a rich and complex history that makes the country an attractive destination for lovers of stunning European architecture and beautiful nature.

This tiny country has always been a vital part of Europe’s history and traditions, and the traces of its grand past are visible even today in the large array of centuries-old castles, monuments, and magnificent palaces. This is our list of the most stunning castles in Luxembourg to visit.

15 Famous Castles to Visit in Luxembourg

A beautiful medieval castle restored in the second half of the 20th-century, Bourglinster Castle is today one of the best destinations for visitors interested in fine dining and stunning settings.

The castle houses the Michelin-starred restaurant La Distillerie, which is considered one of the best in the country. There are also plenty of activities and events taking place on its grounds, including exhibitions and concerts.

Where: Village of Bourglinster, central Luxembourg, 17 km east of Luxembourg City
When: 11th-century, restructured between the 14th- and the 16th- century
Open for visit: Only by appointment. Check here for more information.

Located on a high rocky cliff in the village of Bourscheid, Bourscheid Castle is a medieval fortress now in ruins.

Archaeological evidence suggests that a site existed on the location as far back as Roman times, and the standing structure attests the complex history of the place.

Visitors can have a look inside the old chapel or explore the panoramic views from one of the four towers.

A massive historic fortress on a panoramic location on top of a hill, Esch-sur-Sûre was at its origin a fort tower built in the year 927 to protect the town of the same name.

The fortress was gradually expanded over the centuries. In the 13th-century, the design of the castle suffered modifications under the influence of the popular Gothic style.

Now in ruins, the structure is a protected historic treasure, and it’s still an imposing sight. In the evenings, the castle is beautifully lit.

Where: Town of Esch-sur-Sûre, north-western Luxembourg
When: 927
Open for visit: Yes.

Vianden Castle is widely regarded as one of the best castles in Luxembourg. This stunning place was built in early medieval times as a residence for Count of Vianden.

Today, it is one of the largest fortified castles in the country. Decades of neglect caused the beautiful castle to fall into disrepair, but recent renovation work restored it to its lost glory.

Visitors are enthralled with the original design, featuring complex stonework, spires and turrets, and eye-catching colours. In the summer, the castle hosts its yearly Medieval Festival.

Where: Town of Vianden, northern Luxembourg
When: Between 11th- and 14th- centuries
Open for visit: Yes, check here for more information.

Dating from the 11th-century, Beaufort Castle is one of the oldest medieval castles in Europe, which during its long history frequently passed from one owner to another.

After a few centuries of neglect, the castle is now mostly in ruins, but it is still considered part of Luxembourg’s cultural heritage. A modern structure was built on the same grounds in 1649 by Johann Baron von Beck, then governor of Luxembourg.

The new Renaissance castle was a private residence from its construction up until 2012 and is now also available for visits.

Where: Town of Beaufort, eastern Luxembourg
When: 11th- to 14- century
Open for visit: Only group visits booked in advance.

Located in the village of the same name, Clervaux Castle was, at its origin, a fortress built in medieval times. Most of the original historic structure was destroyed, however, in World War II, when both the village and the castle were bombed.

After a long restoration process, Clervaux Castle has regained its stunning whitewashed walls and grand circular towers. The castle is now home to a museum of castle models and dioramas and to a large international photography collection that forms a permanent exhibit.

Although built as early as the 11th-century, Larochette Castle was severely damaged by a fire centuries later. Even though a part of the castle remained irretrievable, the ruins still convey a rich image of the authentic architecture.

The dungeons, servant quarters, and dining halls were unaffected and can be explored today.

The original Mersch Castle was built by Theodoric, a noble who served as a knight at the court of Luxembourg. After being burnt down by Burgundians, the castle remained abandoned for a long period.

In the 16th-century, another important historical figure, Paul von der Veltz, restored the castle according to a new design so it could serve as a private residence. In the 20th-century, the enlarged Renaissance-style castle became the town hall of Mersch.

Where: Town of Mersch, central Luxembourg
When: 13th-century
Open for visit: No.

Located in the Valley of the Seven Castles, Schoenfels is a picturesque medieval structure with a long and intriguing history. Owned by several families of lords, the castle was purchased by Lord of Schoenfels in the early 16th-century.

Although with no real strategic value, the castle’s fortifications were destroyed by the French in the 17th-century. The central tower has been renovated.

Where: Village of Schoenfels, central Luxembourg
When: 12th-century
Open for visit: No. Renovation underway.

An original structure existed on the location of the Urspelt Castle since the 16th-to 17th century, but it was largely destroyed throughout time. In 1860, the remains of the original property were expanded by Amand Bouvier who transformed it into the castle that can be seen today.

The owner also enlarged the estate by adding gorgeous parks and elm tree gardens. In the 20th-century, the castle fell again into complete ruin due to World War II. An extensive renovation project began in 2005, and the majestic castle now functions as a hotel and events venue.

Where: Village of Urspelt, Clervaux, northern Luxembourg
When: 16th to 17th-century
Open for visit: Yes, check here for more information.

The Wiltz Castle was the magnificent residence of one of the most powerful noble families in Luxembourg, the lords of Wiltz, whose last descendant died in the 19th-century.

Set amid the green rolling hills of Ardennes, this white castle is one of the most impressive sights in the country.

This castle is an eclectic place, home to both the Tannery Museum and the National Beer Museum, with several rooms dedicated to exhibitions of historic war materials about the Battle of Ardennes. The castle also hosts the Wiltz open-air music and drama festival.

Home to the Count of Ansembourg, this medieval castle is believed to have been built as early as the 12th-century, although earlier structures may have existed as well.

Besides this medieval Ansembourg Castle, another newer construction known as the New Castle of Ansembourg was built in the same village.

One of the most impressive features of the old Ansembourg Castle was its huge library of over 6000 books, which now belongs to the Government of Luxembourg.

The charming gardens are the only part of the two castles available to the public as they are both private property.

Where: Village of Ansembourg, central Luxembourg
When: 1135
Open for visit: No, except the gardens. Check here for more information.

Located in a picturesque setting in the valley of the River Blees, Brandenbourg Castle has a millennium-long history and served as a residence for the dynasty of Brandenbourg.

In the 13th-century, the lineage of the Brandenbourg family died out, and the castle was passed down from a noble family to another.

Throughout the centuries, the original construction was widely expanded to include a chapel, new towers, cellars, and heavier walls. In the 19th-century however, it was abandoned. Recent restorations have brought back the castle’s beauty.

Where:  Village of Brandenbourg, north-eastern Luxembourg
When: 10th-century
Open for visit: Yes.

One of the best-preserved fortified medieval castles in Luxembourg, Pettingen Castle dates back to the 10th-century.

Although originally known as the Pittigero Mazini, its name was changed to Pettingen a few centuries later, when it entered the possession of the Lords of Pettingen, a highly influential family in Luxembourg.

The castle was abandoned after the Middle Ages. Only two round towers have survived through time.

The official residence of the head of the state, the Grand Duke of Luxembourg, the Grand Ducal Palace is one of the most magnificent constructions in the country, set right in the heart of the country’s capital.

The history of this important building begins in the 16th-century when it was chosen as the city hall of Luxembourg. In 1817, it became the headquarters of the Government. The architecture features original Flemish Renaissance elements along with modern additions to the interiors.

If you love old European architecture and romantic settings, you may be wondering how Luxembourg castles compare to the more famous French chateaux or German castles.

The answer is that the castles in Luxembourg are not only stunning, but they also have a long, captivating history. Exploring this tiny country could only be a highly rewarding experience.