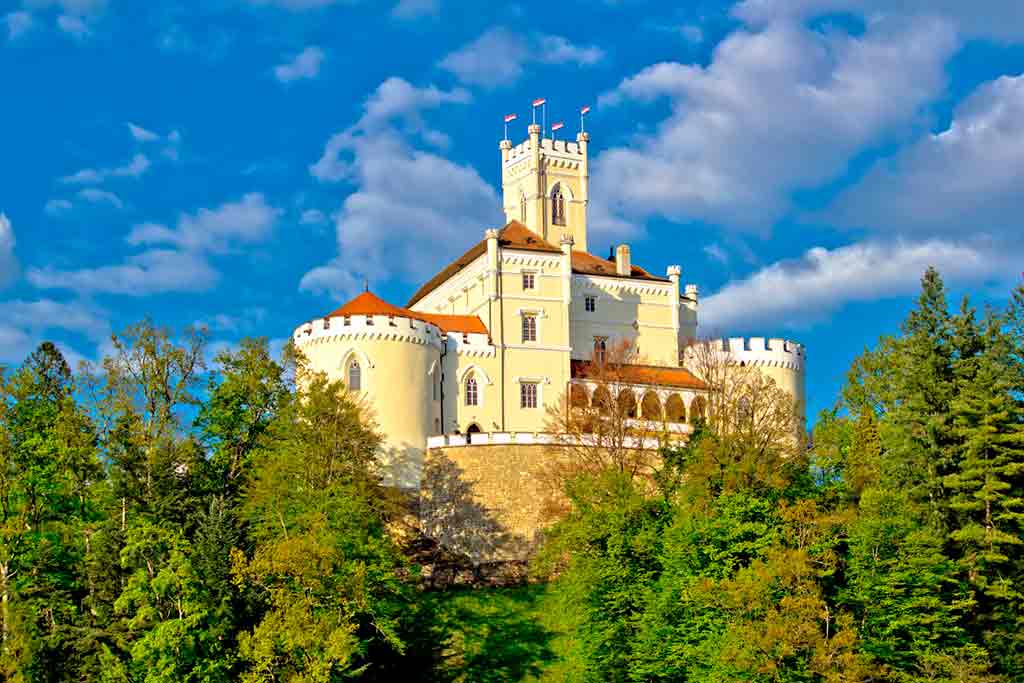 In recent years, the beautiful European country of Croatia has become a top hotspot for tourists to visit, both from the continent and further afield. Its stunning beaches, irresistible weather, and its many historic towns make it a true haven for those looking to escape.

What many tourists do not know, however, is that Croatia has an array of fantastic castles spread throughout the country, each with their own unique and fascinating history.

This list will highlight the nineteen best castles in the country, their key points of interest, as well as practical information, such as location and opening times.

The best 19 Croatian Castles to Visit

One of the highlights of the bustling Croatian city of Split is the Klis Fortress, which has an imposing and dominant presence throughout the city, with its highest point reading 385 meters.

The fortress was originally founded in the 2nd century BC, by the Illyrians, before being taken over by the Roman Empire and transitioning into a stronghold of the Croatian Trpimir.

Today, fans of Game of Thrones may recognize the fortress, as in the show, it is known as Meereen, whereby Daenerys Targaryen crucifies slave-masters.

Where: Split, Croatia
When: Origins in the 2nd Century BC
Open for visit: Yes, check here for more information.

Now a luxury hotel, Bezanec Castle is decked out head to toe with lavish decorations, magnificent antiques, and gorgeous original architectural features. Though it was left devastated after the Second World War, it has turned itself around and reformed itself to its former glory.

Today, despite not being able to go inside unless you are a guest, the hotel restaurant is still open for visitors; it has some of the most beautiful food in the entire area and used only locally sourced ingredients, which gives it a true sense of authenticity.

Where: Bezanec, Croatia
When: 17th Century
Open for visit: Not open to the public

Historically, the city of Slavonski Brod, where the Brod Fortress is situated, has been an important and fundamental center for controlling the border crossings towards Turkey, and also served as a prime connection for commercial trade routes.

Between the years 1715 and 1780, Austria built the fortress on the River Sava as a defense against the Ottoman Empire. The fortress was constructed by peasants of the Military Border, and architecturally, the fortress is incredibly complex, with an array of different sections.

Nestled above the village of Podcetin, the construction date of Cetin Castle remains unknown, however, there are some features of the castle that suggest settlement of the Roman Empire.

The first mention of the fortress dates back to the year 1334, and it became the property of the Frankopan family in the year 1387, where it was gifted to them by the Holy Roman Emperor, King Sigismund. During the Middle Ages, the castle really came into its prime, where several key elements were built, such as a Franciscan monastery.

Where: Podcetin, Croatia
When: Approximately 1334
Open for visit: Yes.

This Medieval fortification, in the center of the bustling town of Cakovec, is the official administrative seat, as well as the biggest fortifications of Medimurje County in northern Croatia.

The castle of Cakovec boasts a whopping seven centuries of history, and with that, has come many renovations and redesigns, giving it a unique and quirky exterior. Interestingly, the castle was damaged by a huge earthquake in 1738 and was rebuilt in a contemporary baroque style, which is its current appearance.

Where: Cakovec
When: 13th century
Open for visit: Yes.

Hailed as one of the largest and best-preserved castles in the westernmost part of Croatia, Pazin Castle is a medieval fortification, constructed upon a solid rock, and is today, the administrative seat of Istria County.

With stunning views of the deep gorge of the Pazincica Foiba river, as well as the surrounding countryside, the castle is both today popular equally for this and its exciting history. The first time the castle was mentioned was the year 983, in a document issued by the Holy Roman Emperor, Otto II.

Where: Pazin, Croatia
When: Castle built in approximately the 10th century
Open for visit: Yes, check here for more information.

Located in northern Croatia, in Varazdin County, is Trakoscan Castle, which dates back to the 13th century. Its original purpose was to monitor the road from Ptuj to Bednja Valley and was relatively small for its time.

Though it is not clear who owned the castle for its initial few centuries, it was known to be owned by the Counts of Celje by the end of the 14th century, who were in control of the whole Zagorje County.

Since the end of World War II, the castle remained fairly neglected, but in recent years, it has been restored to its former glory and stands as a national cultural symbol.

Situated in the town of Marusevec municipality, within the Varazdin country, this 16th-century castle has a truly magical, fairy tale feel. In the year 1618, the noble family Vragovic set out on the mission to enlarge and renovate the castle; in the old castle, there are family arms on the first floor of the western wall.

The later taken over by the Pasztory family, who remained in possession of the castle until the year 1817 until there was no heir to take over; the castle then switched hands multiple times.

Where: Marusevec, Croatia
When: 16th century
Open for visit: Yes.

In Croatian meaning ‘Great Camp’, Velki Tabor Castle is located in the northwest of Croatia, and dates back to the middle of the 15th century, with its present-day appearance dating back to the 16th century, thus demonstrating how well-preserved this castle truly is.

The castle was mostly built by the Hungarian noble family of Rattkay, who owned the castle until the year 1793. Some aspects of the castle are built in the Late Gothic architectural style, such as the central pentagonal castle; there are also many Renaissance towers.

This beautiful baroque castle was built in the year 1756 by the Croatian Count, Krsto Orsic, and is constructed on the site of a previous fortress that dates back to the Middle Ages, and was designed in an L-shaped ground plan.

There was a large earthquake in the 19th century, which destroyed large portions of the castle; however, it also served as a reason to add new features, such as a classicist porch with a tympanum, as well as Doric columns being added.

Today, visitors are charmed both by the town of Gornja Stubica, and the layers of history of the Orsic Castle.

Where: Gornja Stubica
When: 1756
Open for visit: Yes

Built by the Slavonian aristocracy, Mailath Castle is built in line with the English aristocracy, and the owners were fascinated by Tudor royal houses.

The architect of the castle was Istvan Moller, who designed the castle in line with the principles of Gothic architecture, featuring lots of rich wood paneling, as well as dramatic fireplaces and complex patterned tile roofs.

During the socialist era, the castle was abandoned, but it now, however, houses the municipal administration of the city of Donji Miholjac.

Located in the town of Virovitica in the north of Croatia, Pejacevic Castle is one of several owned by the members of the Pejacevic noble family, who originate from the region of Slavonia.

This particular castle was built between the years 1800 and 1804 by the Croatian Count, Antun Pejacevic; interestingly, it is built on the site of an original medieval fortress, which gives the vicinity a fascinating and layered heritage.

Today, a museum is located at the site, which houses several collections of important cultural and historical artifacts.

Perched upon the stone cliff above the beautifully scenic Kupa River is Ozalj Castle, a thirteenth-century fortification that has been converted into a castle, and looks as though it has jumped straight out of a fairy tale.

This castle is famous for many reasons, including the fact that it was joint owned by two noble families, the Frankopans, and the Zrinskis. Despite the age of the castle, it is relatively well preserved; today, visitors come to the castle to experience its layers of history, as well as the on-site museum and library.

Where: Ozalj, Croatia
When: 13th century
Open for visit: yes

Built by the Frankopan noble family near the Ravna Gora, Stara Susica Castle towers at a whopping 800 meters above sea level. It looks completely idyllic, as it is nestled in a luscious green forest, and exudes a truly enchanting atmosphere.

The castle was lovingly restored in the nineteenth century, in line with the principles of Romanticism, that focused on reviving an idealized medieval past. Though this castle is relatively small, it makes up for this in its fascinating history and fairy tale appearance.

Where: Rijeka, Croatia
When: Restored to what it is today in the 19th century
Open for visit: Yes

Located in the popular tourist destination, the island of Hvar, Tvrdalj Castle is a well-preserved Renaissance building, that was built during the 16th century.

There are many reasons why the castle is famous, including the fact that it was the summer residence for the famous Croatian poet, Petar Hektorovic, who lived between the years 1487 and 1572.

Another reason the castle is so famous is for its series of inscriptions that are set into the walls, in the languages Latin, Croatian, and Italian.

Varazdin Castle is a medieval fortress, and construction began in the 14th century but was not finished for another four centuries; the castle has been demolished and rebuilt on several different occasions, with each rebuilt bringing with it a new set of architectural styles, principles, and features.

For example, during the 15th century, rounded towers and moats were constructed, and high walls with bastions were added in the 16th century. Today, visitors are captivated by the castle’s rich heritage and the multi-faceted nature to its past.

Where: Varazdin, Croatia
When: 14th century
Open for visit: Yes.

Trsat Fortress is built on the exact foundations of a previous ancient Illyrian and Roman fortress, despite the present-day one being constructed in the 13th century.

During the medieval period and the Renaissance period, the castle was in its prime, whereby many architectural features were implemented, and it stood at a key position regarding trading routes. However, the castle fell into decline during the 17th century.

As it received any threats from Venice and the Ottoman Empire, as well as experiencing large amounts of damage during the earthquake of 1750. However, during the 19th century, the castle was restored in a Neo-Gothic style.

Where: Trsat, Croatia
When: 13th century
Open for visit: Yes.

The beautiful castle of Luznica is located in the suburbs of Zapresic, in the Zagreb County, and was constructed at the end of the 18th century. The castle was first owned by the noble family Cikulini, who were an Italian family that came to Croatia in the 16th century.

The castle is built in the style of Austrian Baroque, and has many interesting features; for example, the central hall has two balconies, one for men, and one for women. Today, there are beautiful gardens surrounding the park, which feature a wonderful array of flora and fauna.

Built in the 15th century, Starigrad Fortress is located near Omis, in the Split-Dalmatia county in Dalmatia, Croatia. The fortress was built during the Croatian-Ottoman wars, and was a key defense against the Ottoman Empire; its primary purpose was to provide refuge for local people.

Many tourists today visit the Starigrad Fortress for its long and exciting history, as well as its stunning appearance; the views surrounding it are dramatic and impressive, and it is the perfect place to hike to and explore.

Where: Omis, Croatia,
When: 15th century
Open for visit: Yes.