Copenhagen, the capital of Denmark, is one of the most historic cities in Europe, which I highly recommend you to visit at some point. One of the best ways to discover the old history in this stunning city is to visit some of the Danish castles. You will find a broad selection of beautiful castles in Copenhagen including everything from Renaissance places, Medieval forts to fairytale castles. When you walk through some of the various castles, you will get to explore the past and present homes of the Danish royal families.

You have the opportunity to observe the Danish crown jewels up close at Rosenborg Castle, walk through the history of Hamlet at Kronborg Castle or learn about the present life of the royal family at Amalienborg Palace.

Disclaimer: This post contains affiliate links. This means that should you click on certain links, and then subsequently purchase a product, I will receive a small commission. It costs nothing extra to you but helps keep my site running. Thank you for supporting me in this way.

The best 5 castles to visit in Copenhagen 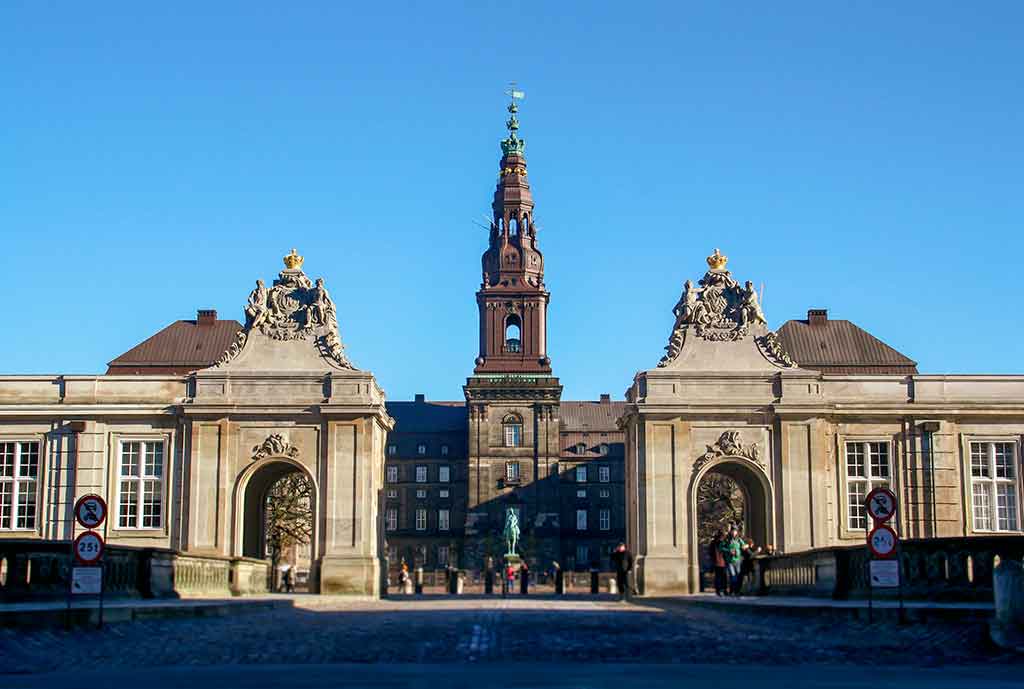 Christiansborg Palace is located on a small island called Slotsholmen in the heart of Copenhagen. Today it houses the Danish Parliament, The Ministry of State, and the Supreme Court.

Christianborg Palace was once the home for the queens and kings of Denmark. However, after several fires, the royal family moved to Amalienborg Palace where they have lived since the late 1800s. The first castle was built back in 1745, but both the palace and the church was ruined in 1794 because of a big fire.

The second palace was finished in 1828, but yet again a fire burned it down in 1884. Finally, the third and current Christiansborg Palace was built in 1928, in a gorgeous neo-baroque style. However, Christian X, who was the Danish king at the time, chose not to move into Christiansborg Palace with his family. Instead, the palace became a working place for the royal family.

You will see that there are plenty of things to explore at Christiansborg Palace. The most impressive room in the palace is the Great Hall. It is best known for showcasing the current Queen’s tapestries which draws 1000 years of Danish history.

One of the highlights at this place is the Royal Stables, which has been home for the royal family’s horses since the 18th century. You can either get a guided tour or go and say hello to the horses on your own.

Underground you will find the ruins under Christiansborg Palace. Here you can discover the oldest and biggest ruin under the castle which is the remaining wall from Bishop Absalon’s Castle, dated back to 1167. The wall was originally built in order to protect the castle from the pirates.

From the palace, you have free access to The Tower of Christiansborg Palace. This is the highest tower in Copenhagen, where you can enjoy breathtaking views of the city.

The Royal Reception Rooms (including the Great Hall with the tapestries)

You might want to check: The best castles in Denmark. 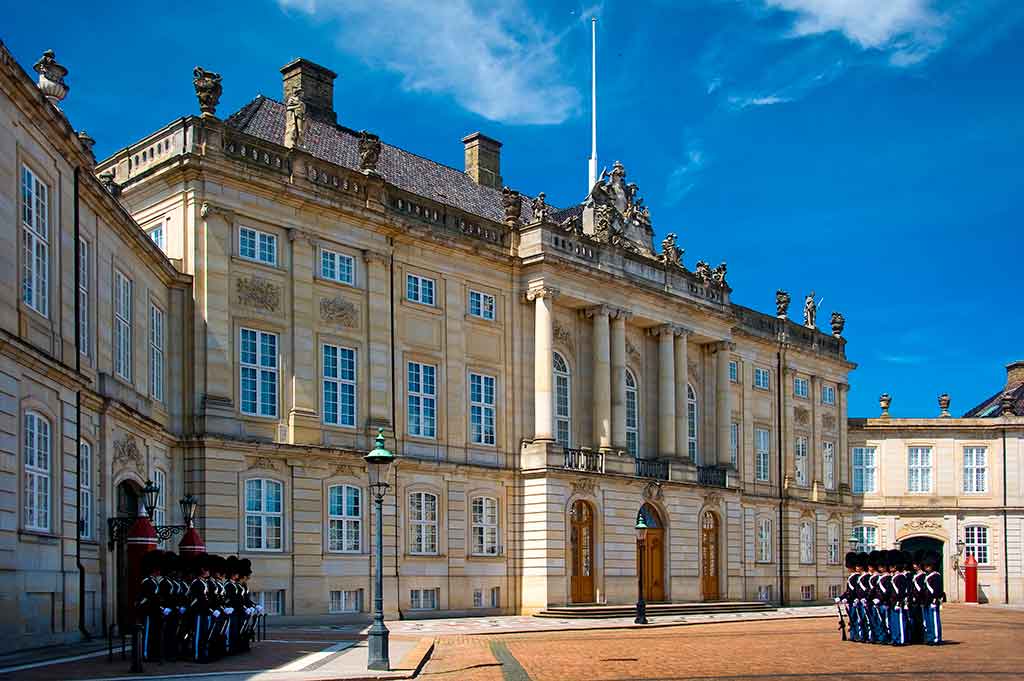 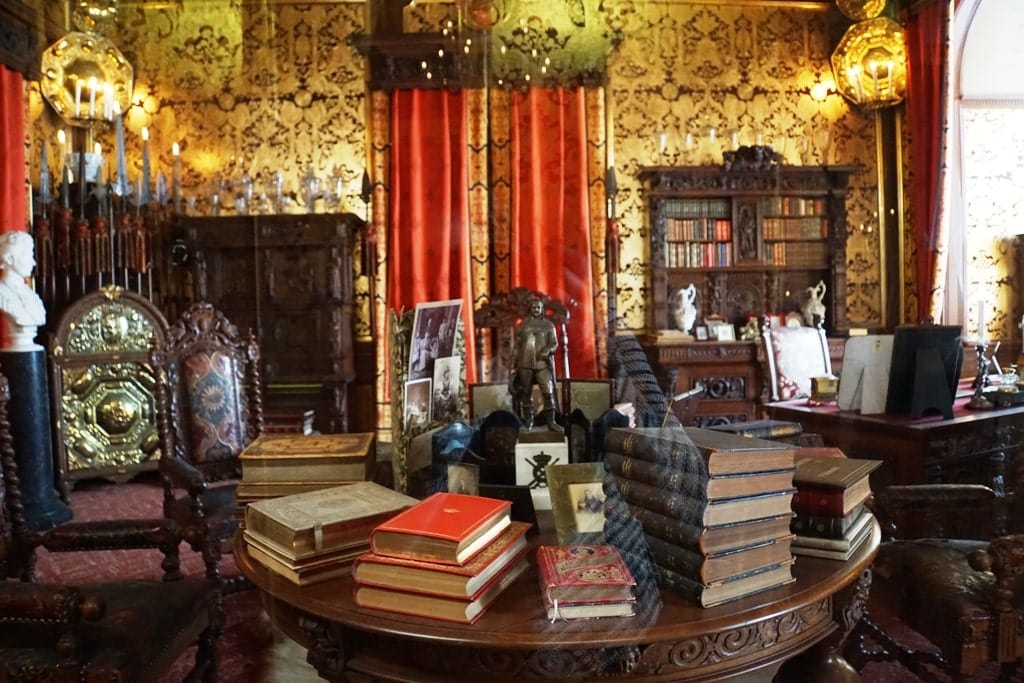 Visitors can visit two of these buildings. The first is the Amalienborg museum in Christian VIII’s Palace where you can observe both the past and present life of the royals. You can explore the previous kings’ and queens’ private chambers over the last 150 years. Furthermore, you will also find the private rooms of the most recent kings and queens of Denmark.

The other palace to visit is Christian VII’s palace where you have the opportunity to see some of the world’s most elegant rococo rooms. You can explore the Dining Room, the lavish Great Hall, the Flora Danica Room, and much more.

At Amalienborg Palace, you can additionally observe the Royal Guard, called Den Kongelige Livgarde. Make sure to experience The Change of the Guards ceremony which takes place every day between 11.30-12 pm. The Royal Guards will be parading from their barracks at Rosenborg Castle, through the streets of Copenhagen all the way down to Amalienborg Palace. Here the actual change of the guards takes place at exactly 12 pm each day. It is a ceremony not to miss. 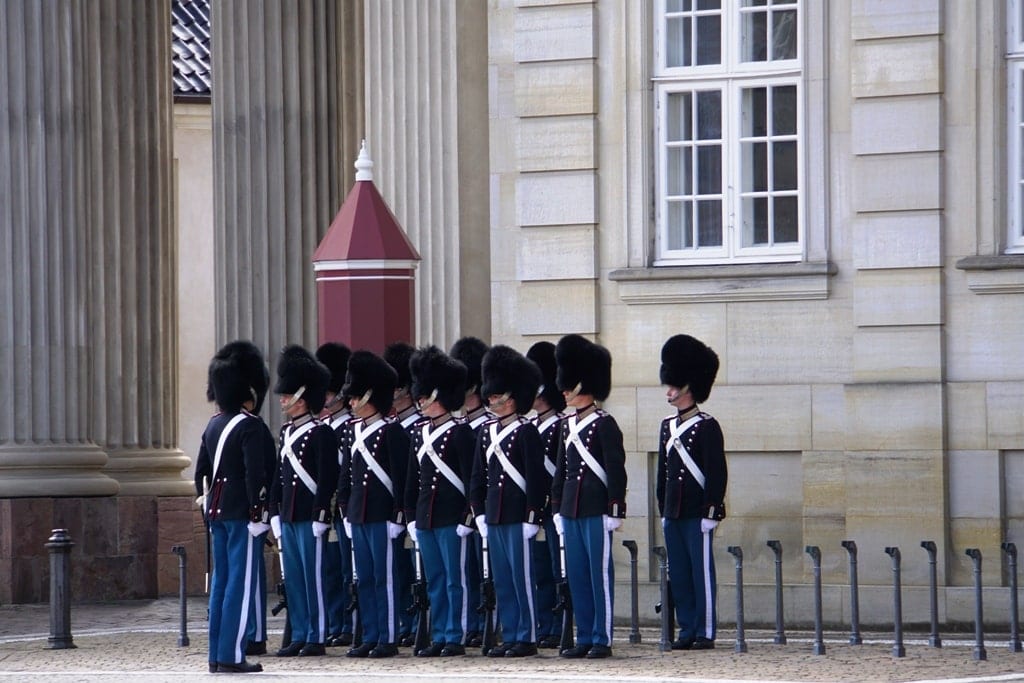 From the Amalienborg palace square, you can walk down to the Amaliehaven (The Amalie Garden) which is one of the youngest parks in the city. In the middle of the garden, you will find a large, beautiful fountain. Surrounding the fountain are two levels of walls and hedges that encircle the garden from both the harbor and the street on each side. You will have some incredible views of the water from the garden. 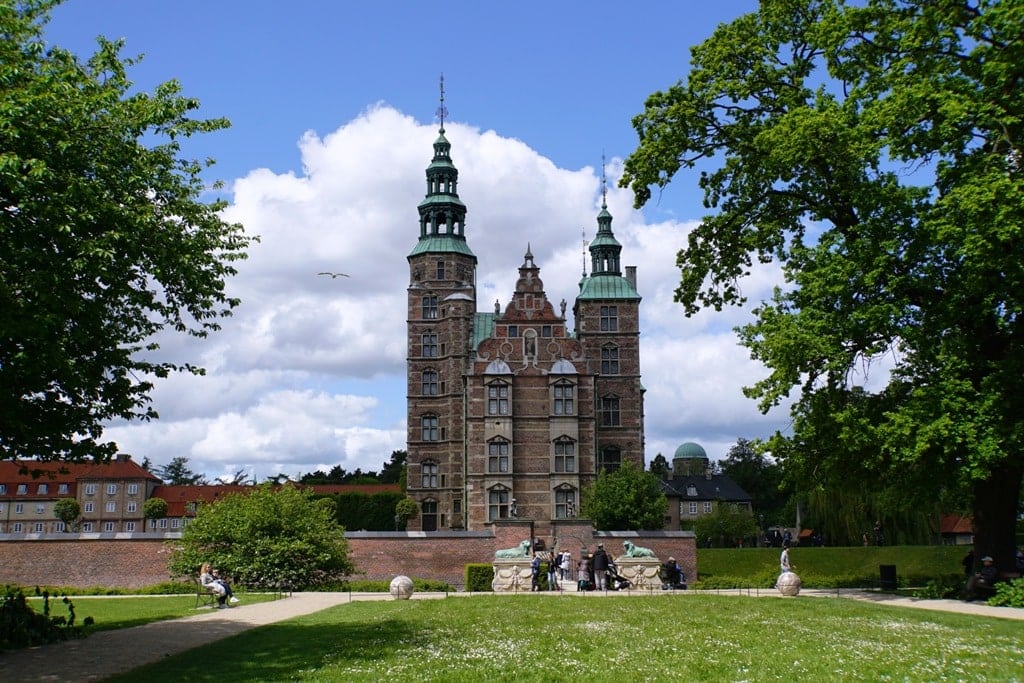 Rosenborg Castle is located in the King’s Garden, sometimes referred to as Rosenborg Garden, in the center of Copenhagen.  It is a very popular garden, with beautiful trees and flowerbeds blooming throughout summer and spring. The garden is Denmark’s oldest royal garden, founded in the early 1600s. Inside the garden, you will find a statue of the famous Danish writer Hans Christian Andersen among many other sculptures. 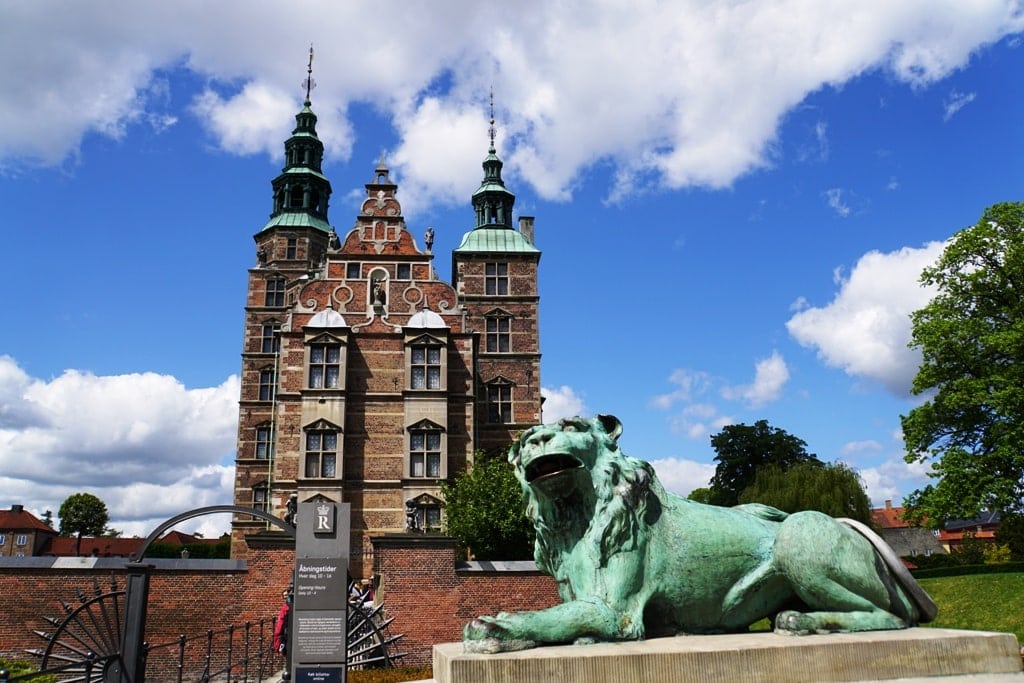 At the museum in Rosenborg Castle, you can explore the various rooms which are furnished as they would have been back in time from the Danish Kings Frederik II (1559-1588) to king Frederik VII (1848-1863). You get to discover some real, authentic royal rooms and chambers with big collections of royal art, furniture, and sculptures. Even the floors, ceilings and wall decorations are represented from different times in history.

There are 3 floors to explore plus a basement. One of the highlights of the castle is the Great Hall on the second floor. This is a throne room including three silver lions which are placed in order to protect the royal thrones.

In the basement of the castle, you will find real treasures as it houses all the royal crown jewels and even the royal crowns. Today you can see four sets of Crown Jewels at Rosenborg Castle, which were all redesigned by the Danish Queen, Caroline Amalie in the 1840s. You can find a ruby set, a diamond set, an emerald set (known as being among the world’s finest), and a pearl set.

The Crown Jewels are still being used today by the current Danish Queen, however, they can only be worn within the borders of Denmark. The Queen will be wearing the jewels at the yearly New Year Reception and sometimes during state visits.

If you are visiting Copenhagen for more than just a couple of days, you can also go and explore some of the stunning castles outside of Copenhagen. You will find a variety of castles not far from the city, and they are all fairly easy to get to. 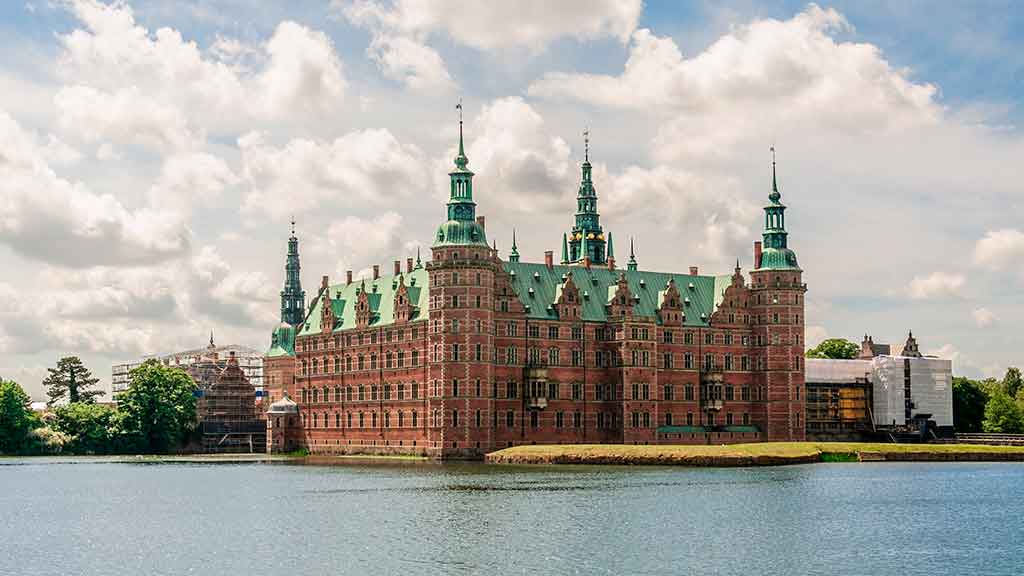 Frederiksborg Castle is one of the most famous castles in Denmark, located in Hillerød, north of Copenhagen. It served as a royal residence several times during the 17th century. The castle is a Renaissance castle which was built by the Danish King Christian IV in the 17th century. In fact, it is the largest Renaissance castle in Scandinavia. The castle is also referred to as the Danish Versailles

The castle complex is established on three islets in a small lake. Around the lake, you will find large baroque styled and landscaped gardens, which makes the surroundings absolutely gorgeous. Frederiksberg Castle is known for this fascinating and magnificent baroque garden. I the garden you will find cascades, historical flowers, and the royal monograms made in boxwood. Here you can also discover the small Bath House Castle and a small cafe which is open during the summer. 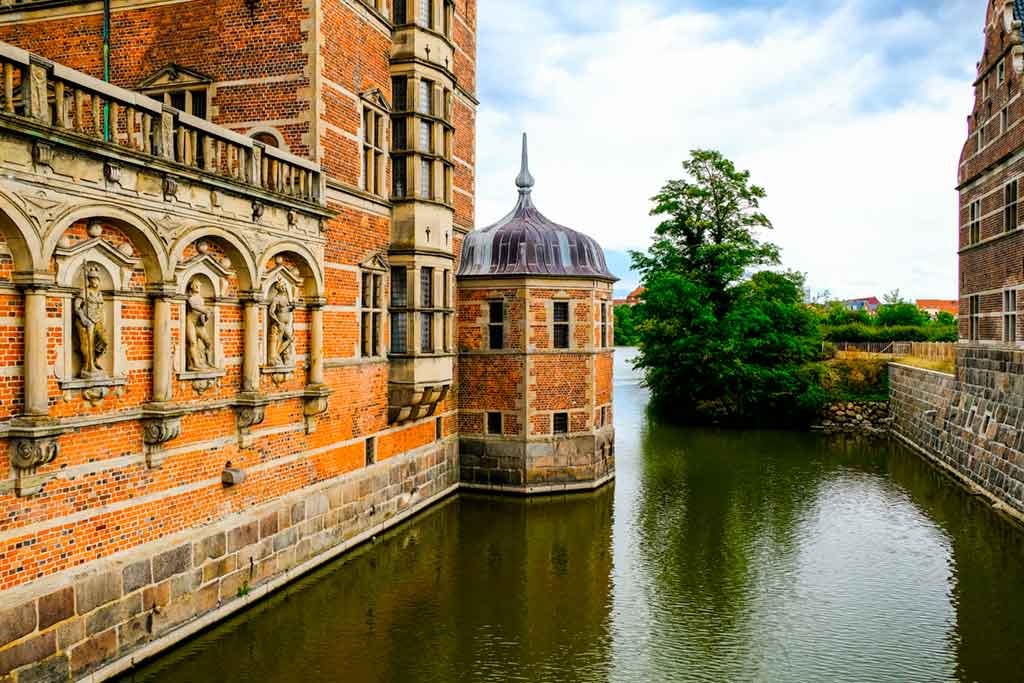 Frederiksborg Castle is home to the Museum of National History. Inside the museum, you will discover historical paintings, portraits, decorative arts and furniture from the past 500 years of Danish history (from 1500 – present). You can also explore special exhibitions, both Danish and international, which will be changing throughout the year.

One of the most unique parts of this place and an absolute highlight is the Castle Chapel. This was built in 1617 in the same Baroque style. Here you can discover the original decorations back from the time of King Christian IV. Visitors will walk on the upper level in the Chapel and be looking down into the church. In the chapel, you will find the remarkable altarpiece made in gold, silver, and ebony in 1605. The chapel is still used today, and it is a very popular place to get married. 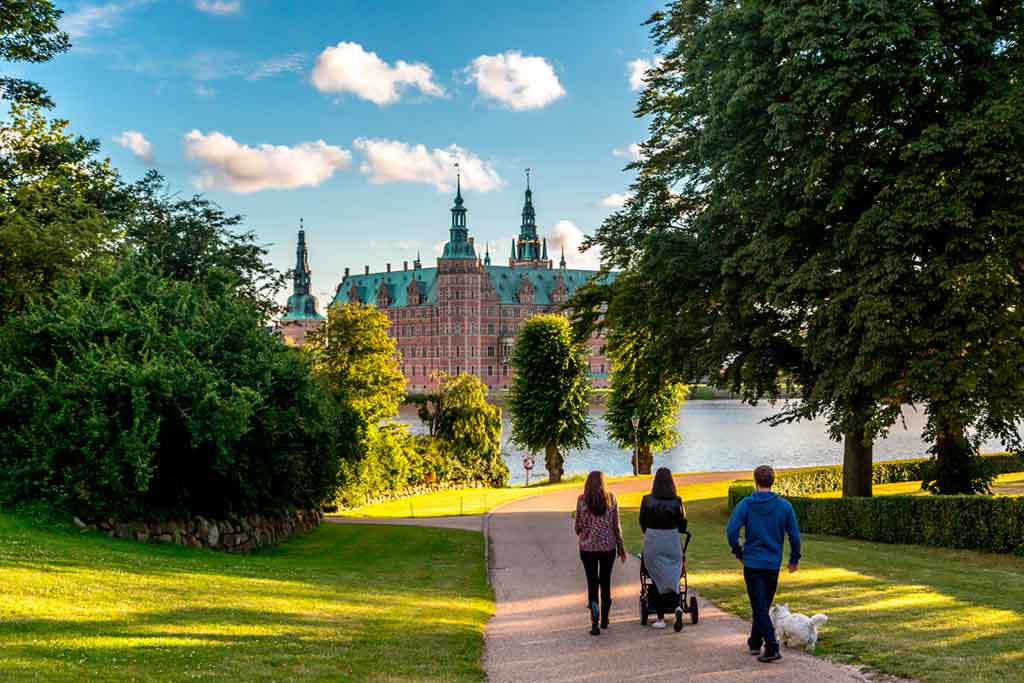 It is easy to get to the castle using public transport. You can take the S-train line A to Hillerød station. This will take approximately 40 minutes from Copenhagen. From Hillerød Station it is only a short walk (1.5 km) to the castle. You can see the route here.

Alternatively, you can book a guided tour that visits both Kronborg and Frederiksborg castles in a day- find here more info. 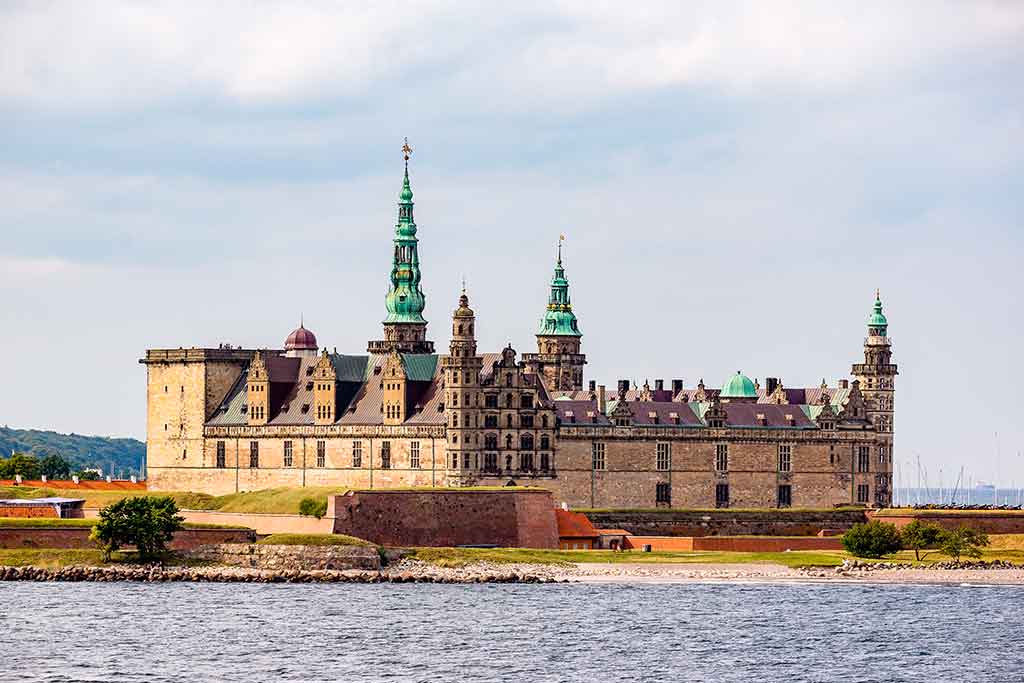 Kronborg Castle is another very well-known and highly visited castle outside of Copenhagen. The castle is located in Helsingør, north of Copenhagen. It is close to the Sound (Øresund), which is a narrow gap of water between Denmark and Sweden. From Kronborg Castle, you will, therefore, find great views across the water to Helsingborg in Sweden.

Kronborg castle is a UNESCO World Heritage Site. It is a Renaissance castle constructed with four wings and a huge courtyard in the middle. It has a sandstone facade and is built with impressive towers, spires, columns, and copper roofs. 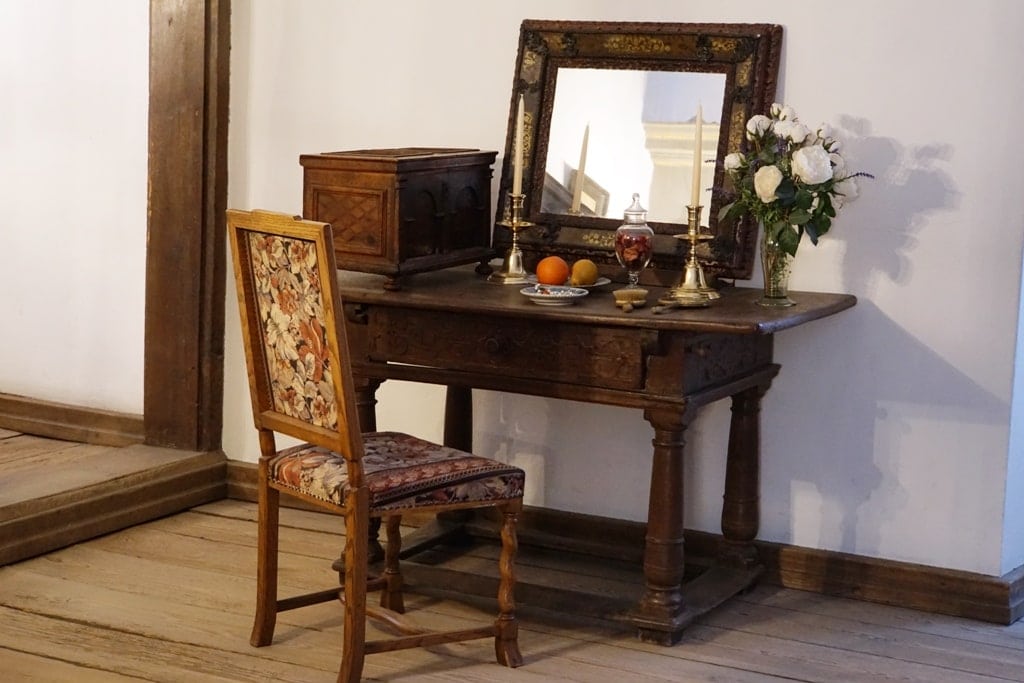 The Great Hall or the Ballroom at Kronborg Castle was the largest of its kind when it was finished in1582 and measures 60 meters. On the walls, you will find several paintings by famous artists. The floor is made of marble and 7 big brass chandeliers are hanging from the ceiling of the beautiful hall.

Kronborg Castle is well known from Willam Shakespeare’s drama of Hamlet, which unfolds in the chambers of the castle. Hamlet, a Danish prince returned to his childhood home, Kronborg Castle, when he heard that his father had passed away. The story of Hamlet reveals how far the prince, Hamlet, is willing to go to get justice for his father, the king. 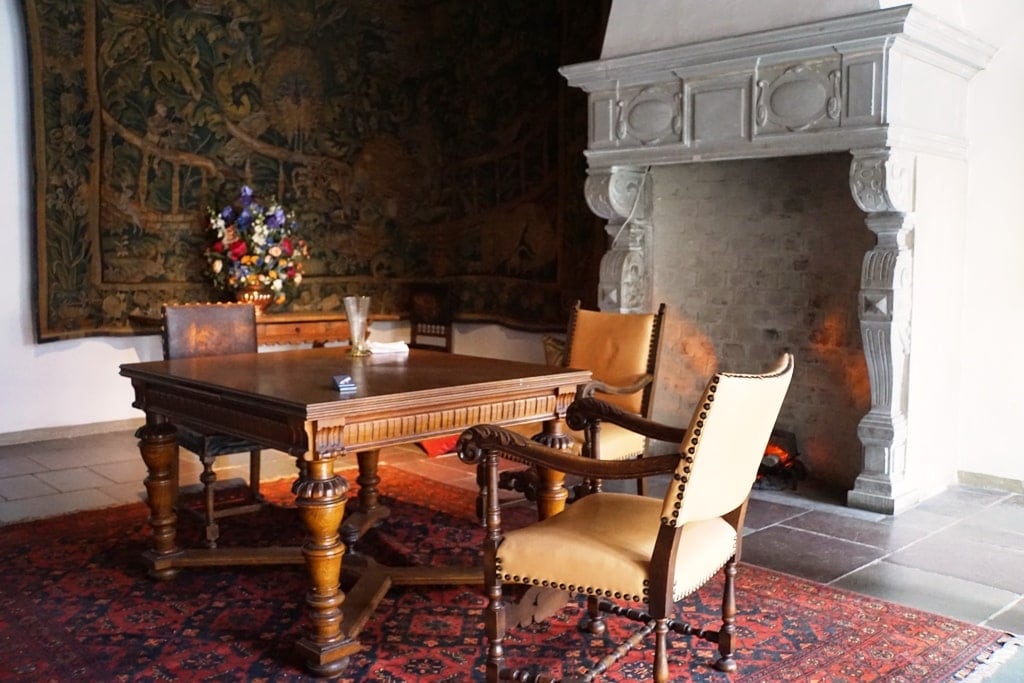 From June until the end of August you can experience Hamlet Live. Visitors will be given a walking tour and meet some of Hamlet’s friends and enemies along the way.

Another famous sight at this place is the enormous sculpture of Holger Danske, a Danish national hero. This statue is placed deep down in the castle ́s casemates. According to the old legend, Holger Danske is now asleep, but if Denmark is one day endangered by enemies he will wake up. Holger Danske will then get on his feet, raise his sword and fight for his country.

At Kronborg Castle, they offer guided tours around the castle and down in the casemates every day. The castle is located just a 50 minutes drive outside of Copenhagen. If you don’t have a car, you can catch a train to Elsinore station. From here it is just a 10 minutes walk to the castle.

Alternatively, you can book a guided tour that visits both Kronborg and Frederiksborg castles in a day- find here more info.

Begin your own fairytale now in the castles of Copenhagen

I do not think you will ever regret to go visit one or more of these castles and palaces in Copenhagen and the nearby area. They are all truly beautiful and each of them with so much unique history to tell.

All of the castles and palaces mentioned here offer guided tours if you want to be more informed while you go on your adventures. However, you can visit every one of them on your own as well. It is up to you. No matter what, I simply do not think you will go wrong by visiting any of these castles and palaces in Copenhagen. 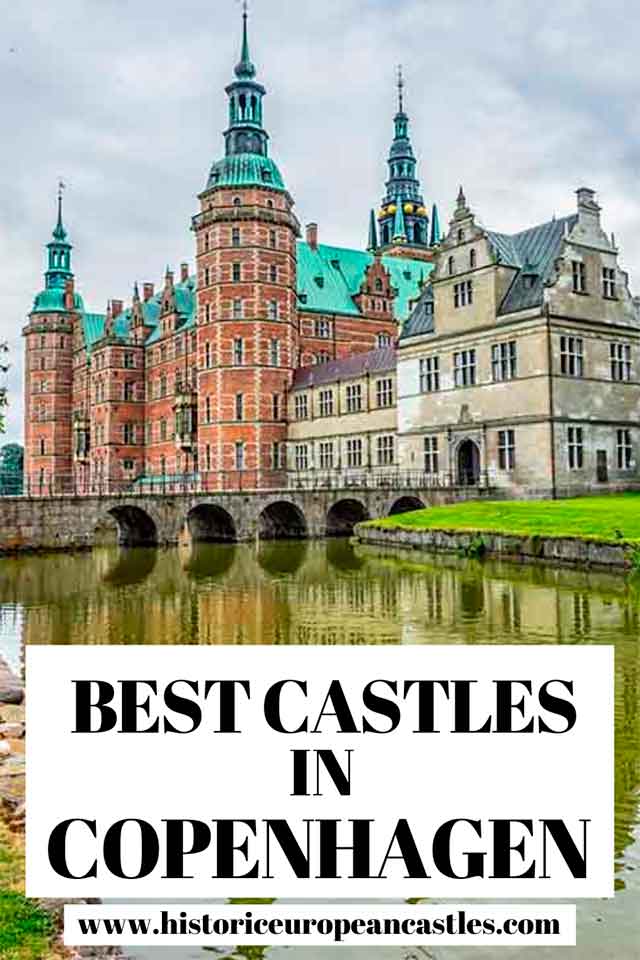